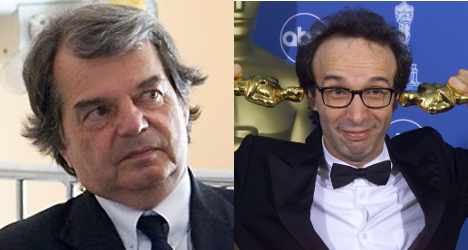 “It has nothing to do with humour, it’s a pure lie,” Brunetta, the leader of the lower house of parliament, said in a statement on Wednesday.

More than 1,000 people attended a rally in Rome in support of Berlusconi, who was convicted of tax fraud by Italy’s highest court on August 1st.

Benigni joked about the apparent “spontaneity” of the rally and said the organizers “paid everyone, otherwise who would have gone,” Corriere della Sera reported.

The comedian and actor, who won two Oscars in 1999 for his role in the film Life Is Beautiful, made the comments during his Tutto Dante show in Florence in which he recites the famous poet’s works.

But Brunetta, a leading member of Berlusconi’s People of Freedom (PdL) party, was not impressed by the comedian’s more contemporary comments.

“It’s a disgrace that hits not only the organizers but vulgarly defames respectable people, who are capable of proving their affection for Berlusconi and their anger at the injustice,” Brunetta said.

Prime Minister Enrico Letta called for calm following Berlusconi’s conviction last week as PdL members threatened to bring down the coalition government in what they believe was a politically-motivated verdict.