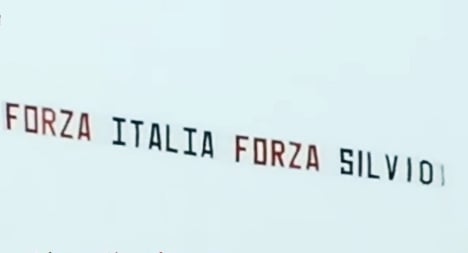 The latest publicity campaign comes just four days after the relaunch of the ‘Forza Italia’ party, nearly 20 years after it was first founded by Berlusconi, who was recently found guilty of tax fraud by Italy’s highest court.

Although the sentence, if confirmed by the Senate, will see the former prime minister banned from politics, he is still viewed as a political leader by his supporters.

Reacting to spectacle on Thursday, Italians back on the ground organized their own “counter-offensive”, the paper reported, including the distribution of pamphlets outlining Article 3 of the Italian constitution: “The equality of all citizens before the law”, followed by “even the citizen and senator Berlusconi”.

Meanwhile, a group of Italian beachgoers had their own special message for the former prime minister which they broadcast in a YouTube video (see below). The video shows a pair writing the message ‘Berlusconi merda!!’ (‘Berlusconi asshole!!’) in giant letters in the sand.