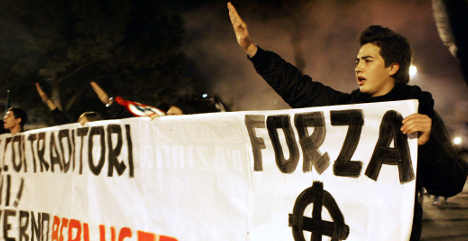 While Milan Mayor Giuliano Pisapia is keen to stop the groups meeting, this is “a restriction on democracy”, warns Erik Bleich, author of The Freedom to Be Racist? How the United States and Europe Struggle to Preserve Freedom and Combat Racism.

The three-day Milan festival is organized by New Force (Forza Nuova), a political party which is fiercely anti-immigration and is currently campaigning against a bill to combat homophobia.

Italian members will be joined by far-right groups from across Europe, including the Swedish extreme-right youth movement Nordic Youth (Nordisk Ungdom).

“When they start shading over into extreme xenophobia and inciting discrimination and violence, or perpetuating a climate of fear, that’s when it’s appropriate to stop them,” he tells The Local.

But determining when a far-right group spills over from harmless discussion on immigration issues to blatant hate speech is not so easy to determine.

Last month, New Force covered a town in nooses ahead of a visit by Italy’s first black minister, Cecile Kyenge, who is responsible for integration in Italy.

Accompanying posters proclaimed "Immigration, the noose of the people!" But the nooses could easily be interpreted as a subtle call for Kyenge to be hung.

“They are exploiting the legal ambiguity,” adds Bleich, and may do so during the upcoming far-right festival. “When they play those kind of games the law is not a great instrument.”

Pisapia may therefore struggle to prove that New Force and their far-right friends are bent on violence. But if the mayor can't legally stop the gathering, Bleich says he can still make a bold statement in opposition.

“If Forza Nuova is ambiguously inciting hatred and intimidation, a social movement response may be best. The mayor could play a role in criticizing the group and suggesting what people could do. They can protest non-violently, protest by staying at home and hanging signs outside of their home,” Bleich suggests.

“This can be a healthier for democracy than a legal response.”