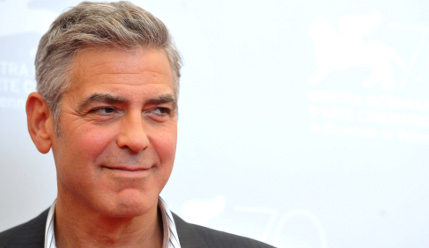 George Clooney is in Italy this week for the Venice Film Festival. Tiziana Fabi/AFP

Was it love at first sight for George?

Not quite. Of course, he liked Italy at least enough to pay a reported €11.7 million for Villa Oleandra in 2002. He initially just saw it as an “investment” and a place to maybe “spend a few weeks each year”.

But the Italian way of life soon captured his heart, with Clooney once saying that the purchase “changed my life in a very pleasant and unexpected way…I realized how beautiful life was in Italy and how it really helped calm me and not feel so pressured.”

And was the love from Laglio reciprocated?

It would appear so. The 900-stong local population is fiercely protective of “their George”. As soon as former mayor Giuseppe Mantaro realised the impact having the actor and his A-List pals in town had on the local economy, he set about making him an honorary citizen.

“Mr Clooney has done so much in the way of putting us on the map,” Mantaro said.

“Before, if you typed Laglio into an internet search engine it would ask you if you meant Luglio – meaning July in Italian.”

The locals are equally protective about the women George gives his heart to, keeping a keen eye on who he brings to town each summer.

They were unimpressed when he dated Elisabetta Canalis, an Italian showgirl.

“I mean, who is she?” Jennifer Folloni, a barista in a bar down the road from Clooney’s villa told the Washington Post in 2011. Another woman referred to Canalis as a “velina”, a derogatory term for the scantily-clad women who parade around on Italian television.

Mayor Roberto Pozzi carefully analysed the break-up: “She was used to the party life in Sardinia. This tranquil­ity can become boring. You either love it or you detest it,” he told the newspaper. Clooney, on the other hand, was “more in sync with Laglio’s brooding soul”.

Clooney’s privacy is also fiercely guarded. Pozzi last year declared that anyone, tourists and residents alike, daring to navigate within 100 metres of the coastline close to Clooney's home would be slapped with a fine.

But has Clooney’s relationship with Laglio always been plain sailing?

Like every true romance, Clooney and Laglio have had their ups and downs. He once led a campaign against former mayor Mantoro’s plans to build a parking lot and a bridge near his home.

Clooney and former girlfriend Stacy Keibler also once suffered a bout of food poisoning after eating at a local restaurant. “”Finally had a bad meal in Italy, our whole dinner party got food poisoning,” his ex tweeted at the time. But she stayed upbeat: “Oh well, at least I’m in Italy.”

What does he do when he’s in town?

When he’s not frolicking on his boat with the likes of Brad Pitt, Clooney’s favourite hang-out is the local branch of the famous Harry’s Bar chain.

But he also frequents less glitzy venues, a newspaper stand owner once said.

He has also used the location to shoot scenes for several films, including Ocean’s Twelve, as well as for his Fiat commercials.

What kind of impact has Clooney had on Laglio?

Well before he came along, homes in the area were selling for €1,000 per square metre, now they’ve surged to more than €10,000. Local businesses have also boomed, with restaurants promoting themselves with a Clooney endorsement. Boat companies also offer ‘Clooney sight-seeing’ tours, but obviously not within 100 metres of his home.

Donatalla Versace has lived in the area for years but her presence doesn't seem to have made the same impression.

Will he keep his home in Italy?

There have even been several reports about Clooney selling his villa as he apparently no longer gets the privacy he craves. He even installed an egg-throwing machine in his garden, which hurled raw eggs at boats that got too close.

But alas, the talk of selling up comes to nothing, and each year he can be spotted happily cruising across Lake Como.