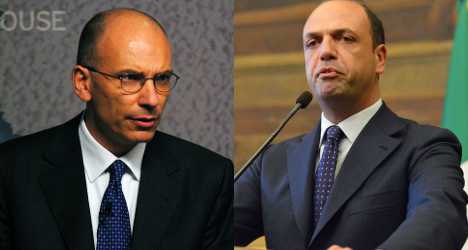 The billionaire tycoon's People of Freedom (PdL) party had promised to cancel the tax and had threatened to pull out from the government if Prime Minister Enrico Letta and his centre-left Democratic Party (PD) did not go along.

Berlusconi hailed the reform agreement as a key victory and said it would boost economic growth.

"We have respected our promises," he said.

Letta said at a press conference later that the IMU tax, which was introduced by the previous government of Mario Monti, was being cancelled for primary residences, farmland and farm buildings.

"This whole operation is being done without changing our public account balance. We will maintain our commitment to Brussels" to keep the public deficit under 3.0 percent of gross domestic product," he said.

Letta said that the €4 billion shortfall from scrapping the tax this year would be made up for by cuts in public spending and increased taxes on the gambling industry to be determined later.

Starting in 2014, Letta said that Italians will instead have to pay a new "service tax" that will finance local public services and which he said would be calculated in a fairer way than the outgoing IMU.

The cabinet also agreed to boost the state redundancy fund by €500 million and to assist the many Italians who are falling behind on mortgage repayments.

Letta has cautioned against political instability at a sensitive time for Italy, the eurozone's third largest economy, which has been stuck in recession since 2011 and has seen unemployment rocket to record highs.

Berlusconi's legal woes have raised concern about the future of Letta's government, the fruit of a hard-pressed coalition deal following a two-month deadlock after parliamentary elections in February.

The supreme court earlier this month upheld a conviction for tax fraud against Berlusconi, which means he now faces expulsion from parliament and a one-year sentence of house arrest or community service.

The Senate committee that will decide whether to eject the former prime minister from parliament will meet on September 9th, while a court is set to decide on Berlusconi's precise form of punishment in October.

Berlusconi also on Wednesday filed a series of documents in his defence to the Senate committee in which he said he will appeal to the European Court of Human Rights over the tax fraud conviction.