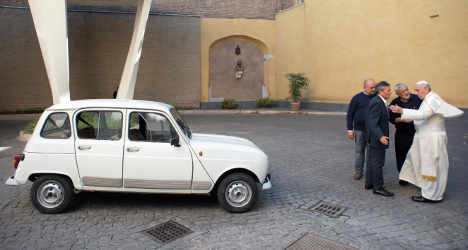 The Renault 4 has 300,000 kilometres on the clock. Photo: AFP/Osservatore Romano

It was presented to Pope Francis by Renzo Zocca this weekend, and a pleased-looking pontiff was snapped by an AFP photographer before he got in behind the wheel and drove away.

Moved by Francis's drive to create "a poor Church for the poor", Zocca wrote to the Argentine pontiff to tell him about his work with disabled people, the poor and drug addicts in a working-class neighbourhood in Verona in northern Italy.

He told Italy's Famiglia Cristiana magazine in an article that appeared online on Tuesday that he had wanted to give the pope a gift, "and what better than my old Renault 4?"

Zocca had used the car to visit the needy in his diocese as well as ferry children around Italy to summer camps.

The elderly priest was amazed when the phone rang on August 10th and it was the pontiff on the line.

"I didn't know what to say, I lost my breath," he told the magazine.

The 76-year-old pope pressed Zocca on whether he would rather donate the car to charity, but finally accepted the gift and gave him an appointment at the Vatican.

On September 7th, Zocca rocked up in the Renault at the Vatican residence where the pope lives.

Francis told the priest he used to own a Renault 4, before taking the keys and driving off, under the nervous scrutiny of his bodyguards.

"The security guard standing next to me was really worried because he knew that from now on he'll be going around the Vatican in my car," Zocca said.

"I left him some snow tyres in the boot. You never know," he added.