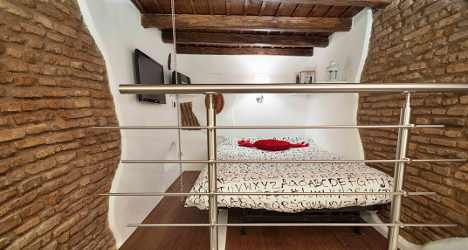 “It had been abandoned for a long time and parts were rotten. In the 1950s and 1960s people lived here, but most recently it had been used to store mopeds,” says Marco Pierazzi, the architect who transformed a seven-metre squared space into Italy’s smallest house.

Few would look at a crumbling room, in an 18th century building, and have a vision of a modern apartment fit for two.

But over a year Pierazzi completely transformed the space into not just a livable home, but one to rival Rome’s most desirable apartments.

“We didn’t have any big problems,” he tells The Local in a relaxed tone. “It was a little difficult, because when the place is so small every little thing matters. If you’re out by a centimetre or two then you can’t get the furniture in!”

Pierazzi has taken on every challenge and come up with novel ways to make use of the space.

The steps which lead to the loft bedroom have two other uses; one step is the perfect height to double up as a seat at the pull-down table, while the space under the steps is bathroom shelving.

A flatscreen TV on the wall can be watched from the sofa, which folds out into a bed, while a blind pulls down and creates the feeling of a separate room.

Pierazzi admits that the remarkably small wardrobe and drawers were bought from the children’s section at Ikea. But guests who arrive with adult-sized bags need not worry; he has installed a hook above the door to hoist oversized luggage to the ceiling.

Despite renovating the entire space, with a complete bathroom and kitchen, Pierazzi has exposed parts of the original wall and from the outside the entrance looks like any other in Rome.

Pierazzi proved that the house, listed as a residential property in the 1930s, makes a comfortable 21st century home. He lived in the house for a few months with his wife, until the couple had a baby.

“It’s a beautiful place, right in the centre of Rome. But it’s impossible to live here with a baby!” Pierazzi says. The family now live further out of the city centre, but when they or friends want to be in the heart of Rome, they return to the smallest house in Italy.