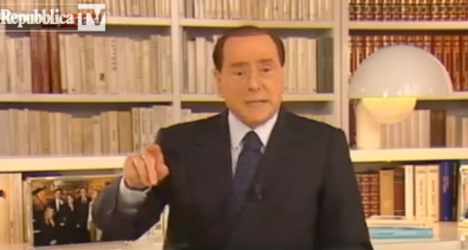 "I am here to ask you to open your eyes," the billionaire said in the video. "React and go and fight the left and the judiciary."

"We cannot allow Italy to remain imprisoned by a sick judiciary," Berlusconi said, calling on Italians "with good sense" to head to the streets in protest.

The centre-right political leader has long since said that he is the victim of the Italian justice system which has been corrupted by the political left.

The video message was released a day after Italy's highest court upheld a €500 million fine for Berlusconi's Fininvest company, over bribing a judge to win a takeover bid.

The ruling is the latest in a string of cases against Berlusconi, known as "The Knight" by his supporters.

In August the high court found him guilty of tax fraud, the first definitive ruling against the former prime minister which may see him ousted from politics. A Senate committee is due to take a decision on Berlusconi's political future on Wednesday night, ahead of a Senate vote on his expected in October.

Earlier this year Berlusconi was also found guilty of having sex with an underage prostitute, a conviction he is appealing.

Watch the video message (in Italian):