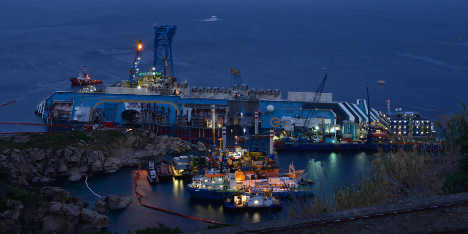 The Costa Concordia was raised earlier this month. Photo: The Parkbuckling Project

Salvage workers who pulled the doomed vessel upright from its watery grave last week in an unprecedented operation "have ensured the ship is secure and given the green light to begin the search," a spokeswoman said.

"Specialist divers from the coastguard, fire brigade and police have begun scouring the area between the righted ship and the land," she added.

The team is looking for the corpses of Italian passenger Maria Grazia Tricarichi and crew member Russel Rebello, whose bodies were not recovered after the nighttime disaster on January 13th 2012, which left 32 people dead.

They will also be assessing how best to carry out the search within the wrecked liner if necessary.

Franco Gabrielli, head of Italy's civil protection agency, had earlier said that the righting of the ship gave searchers a chance to access parts of the vessel previously off limits.

"When the ship toppled, corridors became deep wells. Now she is upright, we can get to areas previously off limits," he said, adding that there would likely "still be areas it is difficult to access and search."

The Concordia had 4,229 people from 70 countries on board when it struck rocks just off Giglio after veering sharply towards the island in a bravado sail-by allegedly ordered by its captain, Francesco Schettino.

It lurched over onto one side during a chaotic and delayed evacuation, throwing terrified people into the freezing sea and preventing some lifeboats from deploying.

Dubbed "Captain Coward" and "Italy's most hated man" in the tabloids for apparently abandoning ship while passengers were still on board, Schettino is currently on trial in the Tuscan town of Grosseto.

On Monday, he told the court that the ship's Indonesian helmsman was to blame for causing the accident, after misunderstanding a crucial order.

His defence team also asked permission for experts to go aboard the wreckage to determine whether technical problems contributed to the disaster, after reports that some safety mechanisms failed to function, aggravating the situation.

Schettino, who is on trial for manslaughter and abandoning ship, faces up to 20 years in prison if convicted.