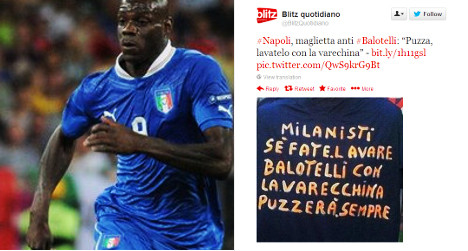 Mario Balotelli (L): Илья Хохлов/Wikicommons and a tweet with a photo of the offending t-shirt slogan (R): Twitter

Photos of the offending t-shirt, which bore the slogan: “Milan supporters, if you wash Balotelli with bleach he will still stink” have been widely shared on Twitter and judged as "racist" by the Italian media.

According to Il Mattino, the unnamed street peddler, who is based on Via Toledo, confirmed that it was sold after the images began circulating on the web.

The seller’s t-shirts have caused controversy in the past when he made an offensive t-shirt about Uruguayan footballer Edinson Cavani after he left Napoli football team. “You loved Napoli like your wife”.

This isn’t the first time the 23-year-old AC Milan striker – known as ‘Super Mario’ – has been the victim of racist remarks.

Click here to read our profile of Mario Balotelli, our former Italian of the Week

Last season the football player walked off the pitch when he became a victim of racist abuse, although said he feels unable to do the same again as his team will be punished.

In August, the football player hit international headlines when US magazine Sports Illustrated put Balotelli on the cover and named him "most interesting man in the world" and “the face of the New Europe”.

Balotelli, who was born to Ghanaian parents and raised by Italian foster parents but not formally allowed to become an Italian until adulthood, used the interview to criticize Italy's "stupid" citizenship law.

“That’s a stupid rule. I spent 18 years in Italy, and I was not Italian yet," he told the magazine. "That's why I hope all the guys that are like me and living this are going to be Italian before I became Italian."