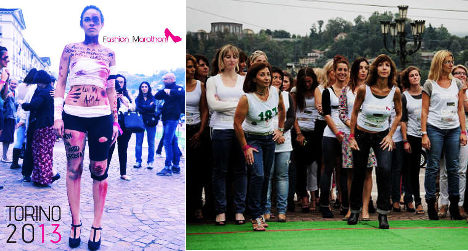 In total, 101 Italians participated in the race. Photos: Fashion Marathon

In total, 101 Italians – including five men – participated in Italy’s first ‘Fashion Marathon’, which took place in Piazza Vittorio Veneto, Turin, in the northern region of Piemonte.

The afternoon event included a warm-up Zumba dance followed by an 80-metre race, in which participants had to run in heels measuring at least 7cm.

Click here to view a gallery of the event

“The idea was to raise public awareness and show solidarity through a fun public event with a fashion and beauty theme,” one of the event organizers, who did not wish to be named, told The Local on Monday.

“Too many women [who experience domestic violence] feel too ashamed to seek help from institutions – and, in any case, bureaucracy can make this a slow process.

“The event wasn’t about showing opposition towards men, but about highlighting general ignorance of the issue.”

Privately funded by a group of individuals, the race was organized independently of any official organisation or political party.

Prizes included beauty treatments and a ride in a pink limousine, all provided by local businesses.

But, the organizer noted, not a single person had even asked what the prizes were – they were simply happy to take part.

Speaking to La Stampa newspaper, a woman at the event identified as Emanuela said: “I was a victim of domestic violence. It was difficult to find the courage to report it; it was as if I felt shame for what he did to me.”

The woman’s daughter, identified as Erika, added: “I live in trainers and have never worn high heels in my life. But today I’m here to give courage to my mum and all the women who are in similar situations.”

Of the five men who ran in high heels, one was the 70-year-old father of a victim of male violence.

The organizers now have plans to repeat the event in other locations.

“We want to bring it to three cities – in the north, the centre and the south of Italy,” one organizer told The Local. “The next one will be in Rome next March and then another in July in Catania.”

In June, Italy’s biggest trade union, the CGIL, recorded 81 femicide victims in 2013 alone. And in 2012, the number of victims stood at 124, according to Italy’s national statistics agency ISTAT.

Last week, The Local reported that teaching boys not to hurt or kill their girlfriends is now part of the curiculum in schools in the northern city of Turin.