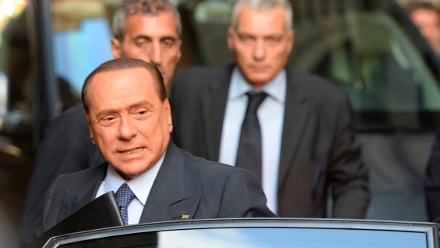 Senators were tipped to approve the motion in a vote expected later on Friday, a move that could add to the political tensions that threatened to topple the coalition government earlier this week.

A vote by the full Senate chamber required for the motion to be definitively approved is set for later in October and would mean Berlusconi being out of parliament for the first time since 1994.

Berlusconi's lawyers did not attend Friday's hearing and said in a statement that the committee, which is dominated by leftist opponents of Berlusconi, "does not even appear impartial".

"There is no chance for a defence," they said.

Berlusconi supporters in the committee have tried to stall the proceedings, which began last month.

The three-time prime minister said on Thursday that the hearing was part of "an operation to get rid of the leader of the centre-right".

Asked about the possible expulsion, he quipped: "I wish! It would mean I could rest a bit".

Supporters of the embattled Berlusconi have said he could continue to lead his People of Freedom (PDL) party even out of parliament but analysts say his failed challenge to Prime Minister Enrico Letta shows he has lost control of the party.

Berlusconi said on Saturday that he was pulling his ministers out of the government and pushing for early elections but the ministers themselves and
other once loyal allies dissented and he was forced into a U-turn in parliament on Wednesday.

Some PDL lawmakers have said they could break off and set up their own grouping in parliament, although the 77-year-old Berlusconi played down
divisions saying: "I see an absolutely united party with some internal differences".

Berlusconi has been a headline act on Italy's political scene for the past two decades, serving as prime minister for nearly 10 years and becoming
notorious for his buffoonish antics on the international stage and sleazy sex scandals.

Italy's supreme court on August 1 turned down Berlusconi's second and final appeal against a tax fraud ruling, handing him his first definitive conviction
in many years of legal woes.

A judge in Milan is due to decide later this month whether Berlusconi should serve the one-year prison sentence he received as part of the conviction as house arrest or community service.

He is also appealing convictions for having sex with an underage prostitute, abuse of office and leaking a confidential police wiretap to
damage a political rival and is under investigation for bribing a senator to join his ranks.

Berlusconi's Senate expulsion would happen under a law approved last year with votes also from his own party and aimed at cleaning up Italian politics
by ridding parliament of criminals.

He would also be barred from the next elections.

Berlusconi has now appealed to the European Court of Human Rights over the law, saying that it should not apply to him because his crimes were committed before the legislation was approved.