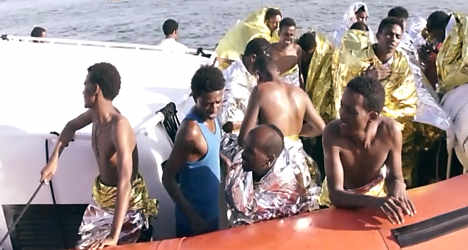 A raging fire on board the boat, screams of fear and the drop into the dark waters: Ali, one of the 155 traumatized survivors from Italy's refugee boat disaster, struggled to hold
back the tears.

"We arrived near the coast at about three in the morning. We waited a long time, but no help came," the hollow-eyed 25-year-old told AFP, as he sat in an overcrowded refugee centre on Lampedusa island.

"We were trying to make a signal and the captain burned a T-shirt on the top of the boat," said Ali, wearing a garish green hand-me-down tracksuit.

"When the people saw the fire, they went to the other side and the ship lost its balance. A lot of persons sank down. The terror began," he said.

Over 300 people are feared to have died after a boat carrying around 500 asylum seekers caught fire, capsized and sank on Thursday morning.

"I had to swim for five hours before rescue came. My family, a lot of friends were on that boat. I cannot speak of it, it is too painful," he said.

Ali said he paid €1,000 to board the boat for Italy after a torturous journey across the Sahara from the dictatorship he was fleeing in Eritrea to Libya where he set off.

Ali keeps to himself and has yet to make friends with others in the camp who are fleeing war and persecution – more than 1,000 in total including previous arrivals in a centre with only 250 beds.

A parliamentary group that visited on Saturday described their living conditions as "shameful" and "unacceptable for a civilised country".

The charity Save the Children has called on the government for the 228 children there – including 40 unaccompanied minors among the survivors of the disaster – to be evacuated immediately.

Refugees could be seen on green benches under a tin roof or clustered under trees behind a wire fence with rubbish strewn all around and dirty mattresses and thermal blankets lying discarded.

Songs in Arabic sounded out across the yard, where there were long queues to use the telephones as children bounced footballs off concrete walls or played with a sandy-coloured stray dog.

Bare-foot toddlers in nappies watched their fathers sleeping and women in headdresses washed clothes with a bucket and hose.

Mohammed, 53, moved his family out of Syria when the bombs began to fall around him and hoped to head to Switzerland but had to leave his loved ones in Egypt when it became clear he did not have enough money to pay for their crossing into Europe.

"I took a bus through the desert to Libya, a four-day journey full of fear.

I suffered because I knew I had to go forward but I hated to leave my wife, two daughters and two sons behind. They are so young, they need their father," he said.

"We fled the danger in Syria, but I was treated so badly in Libya too, there seemed to be no escape. When I rang my family from here they were glad I survived but we do not know how I will get out and bring them here," he added.

Grey-haired and tubby, Mohammed has been in the centre 11 days and relies heavily on the 24-hour medical service provided by on-site doctors.

"I am diabetic, which made the journey even more dangerous. When we set off from the Libyan coast I had to wade into the water up to my chin, with my medicine bag and documents in my mouth. It was terrifying to fear losing everything."