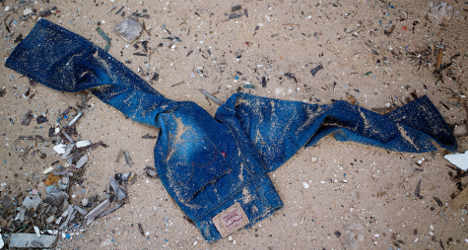 A pair of abandoned jeans in the sand on the Italian island of Lampedusa. Photo: Robert Salomone/AFP

Over the past 20 years, between 17,000 and 20,000 migrants have died crossing the Mediterranean. Often fleeing war, famine or a dictatorship, they pay traffickers for a place on an overcrowded boat to reach the safety of European shores.

Migrants face grave risk; when a boat of around 500 Somali and Eritrean migrants sank off the coast of Italy on October 3rd, just 155 passengers survived.

But despite the risks, there was “not much choice” for the victims, according to Philippe Fargues, director of the Migration Policy Centre at the European University Institute in Florence.

“Somalia is completely chaotic and Eritrea is a terrible dictatorship,” he says, prompting people to flee. “You have the possibility to apply for asylum in any consulate representing the EU. But if you are in Somalia or Eritrea will you find such consulate, and will you feel secure knocking at the door in a dictatorship?”

Another option is to go to neighbouring countries, but Fargues runs off a list of states which are either “not easy” or “dictatorships”, prompting people to travel further afield.

Nearly 400,000 Somalis live in Kenya’s Dadaab refugee camps, described by British-Somali Journalist Hamza Mohamed as “an open prison”. “To leave the camps you need a permit, it’s an open prison. People want to find jobs, but in the camps it’s not possible,” he tells The Local.

In addition to civil war, Somalis have fled a 2011 famine which killed nearly 230,000 people according to UN estimates. “A lot of people are only now reaching Europe, some of them have walked for months,” Mohamed says.

Many people travel to Libya and pay to be trafficked across the Mediterranean. Between March 1st and May 3rd, 24 boats left Libya with 2,500 people – mostly Eritreans, Ethiopians, Somalis and Sudanese. Just four were turned back by the Libyan coastguard; one arrived in Malta while 19 reached Italy.

A total of 30,000 migrants have arrived in Italy this year, pushing the immigration system to breaking point.

But Frontex, the EU’s border control agency, says it is not working with the Libyan government to tackle the issue. “We do not have an agreement signed with any of the Mediterranean countries from which the boats depart,” Izabella Cooper, Frontex spokeswoman, tells The Local. "Some individual member states have bilateral agreements,” she adds.

Such bilateral agreements are fatally flawed, however, according to Amnesty International. The human rights organization said yesterday that agreements with countries such as Libya to stop migrants travelling to Europe turn “a blind eye to human rights abuses”. In a June report Amnesty documented “brutal beatings” at immigrant detention centres in Libya, where children and adults were held for months in squalid conditions.

The answer from Cecilia Malmström, the EU’s home affairs commissioner, is instead for Frontex to launch a “big search and rescue” operation across the Mediterranean. But Cooper says there is no money left in the Frontex budget for such a task.

“We have been present in Italy since May and have extended the length of the operations. For the time being we do not have any additional funds for Frontex to expand,” she says. The agency is, however, looking into the possibility of reallocating resources from other projects to support Italy.

For Mohamed, politicians must tackle the problem from within Somalia: “Foreign governments need to actively inform people of the risks they are taking [in a sea crossing] and give them options. They need to be made aware of the dangers they are taking.” Few of those who drowned last week would have taken such a risk if they knew the reality they would face, he says.

Traffickers who profit from people’s desperation must be brought to justice, while Mohamed also advocates incentivizing people “to go back and restart their lives” in Somalia. Negotiations must be started between fighting factions, he says, while people who have fled from famine should be supported. If such steps are taken, people  will no longer “have to risk everything to get to Europe”.