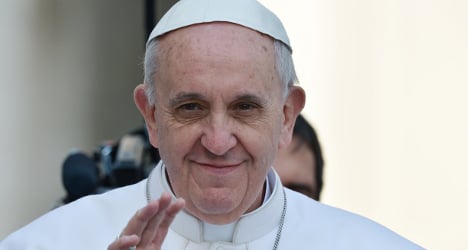 Pope Francis has called for reflection on the subject of divorce. Photo: Gabriel Bouys/AFP

"When you are offside in a football game, the referee blows the whistle," Vincenzo Paglia, head of the Vatican's Pontifical Council for the Family, said at a press conference.

The diocese of Freiburg has defended its decision, saying it wanted to "reach out" to divorcees and would apply the practice on a case-by-case basis and only following interviews with a priest.

The Vatican already condemned the decision on Tuesday with spokesman Federico Lombardi saying it risked causing "confusion" and did not mean that Catholic Church policy on the issue had changed.

Under Catholic doctrine, marriage is for life and breaking the sacrament means not being able to receive the Eucharist if the marriage is not officially annulled by an ecclesiastical court.

Pope Francis has called for reflection on the hot-button issue, which is due to be discussed at a special synod of bishops next year.