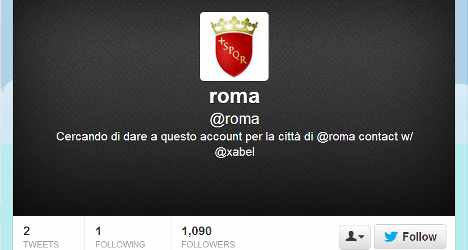 Javier Castaño has been trying to return the Roma Twitter handle to its rightful owners. Screenshot: Twitter

Just months after Twitter was launched, Javier Castaño took the initiative to register a number of accounts naming cities and countries globally – including Rome – thinking they could prove profitable. The Spaniard, however, soon found that Twitter bans people from selling off accounts to others who may want to claim the account name.

Castaño instead decided to contact the city's authorities and governments around the world in a bid to relinquish the account name for free. But nobody wanted ‘@Roma’, La Stampa said.

Despite Castaño making a public appeal to have the account given to Rome's authority, he has not had any response.

The city council instead runs @romacapitaleTW, which appears extravagantly long in a 140-character Twitter world. The real account has 18,600 followers, while Castaño’s largely inactive account has just 1,000.

Castaño, who worked as a graphic designer before losing his job and turning to shoe-shining, has had more success elsewhere. Spanish authorities took over @Malaga and @Canada was passed to the national government last year, La Stampa reported.

Italians are relatively behind in their social media use, with only 29 percent turning to sites such as Twitter and Facebook. This compares to 65 percent in the Netherlands and 57 percent in the UK.

Bucking the trend is Pope Francis, who in July was named the world’s most influential Twitter leader. He boasts seven Twitter accounts, including one in Latin, and tweets often from the Vatican.