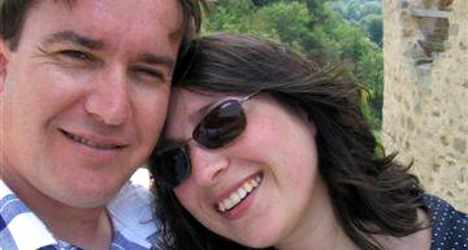 When I was living in England, I went to Maso, an Italian restaurant, and promptly fell in love with the Sicilian waitress; unfortunately, she wasn’t in love with me. I spent five months dining at the restaurant three times a week in a vain hope of persuading Eunice to go for a meal with me. I was such a regular customer, I could almost plan the waitress’s shifts. Eventually Eunice agreed to a date and I then pestered her until she agreed to marry me.

Eunice emigrated to the UK because she heard there were better employment prospects and she thought life was organised better and the politicians were less corrupt. What Eunice didn’t realise was that after my holiday in Sicily where I met her family, I decided I wanted to live in Italy. I then pursued this dream in the same way I pursued Eunice. Against her better judgement, she agreed we could move back to Italy. Little did I know, Eunice thought Italy would drive me mad and we would move back to the UK within 18 months. Six years later, Italy is driving her mad, but we are still here.

So you wanted to live in Sicily, but settled in Piemonte. How come?

Eunice said we wouldn’t find work in Sicily, but that we ‘might’ find work in Piemonte, and for once I listened to her advice. However, I see Piemonte as a stepping stone to moving to Sicily, much to my wife’s dismay.

Did you get married in Italy or the UK?

I wanted what I thought was a real Sicilian wedding, was a five-day ceremony as seen in the films, with lots of singing and dancing surrounded by Eunice’s family and many Sicilian friends. Unfortunately I had to concede to a traditional wedding in the UK. While I was courting Eunice at Maso Restaurant I made great friends with Mario and Giovanna, the restaurant owners. Mario was my best man and they both agreed to open the restaurant on the Sunday for our wedding reception. Approximately 30 Italians flew in for the wedding.

Italy's a tough place to find work, so what do you do for a living?

Eunice is a qualified teacher and found a job in Italy three months before we moved. So, while I tried to sell our house in the UK, Eunice moved to Italy, rented a house and started work.

Arriving in Italy, I suddenly realised that it was not very easy to find work when your Italian vocabulary is limited to ‘where is the bathroom?’ and ‘another glass of white wine please’. The other problem is the few jobs that are available are given to relatives or to friends. I found work as a labourer for a landscape gardener; I also dug holes and pruned trees for two women who were trying to create an English cottage garden in the middle of Monferrato and an Italian builder gave me some work mixing cement and carrying bricks for him. When I wasn’t working I was the house-husband, who learnt to mop floors, cook pasta and make the beds.

For the past three years I have been importing industrial water pumps from the Far East and selling them in Europe. I know that without Eunice working as a teacher and her guiding me through the bureaucratic nightmare of Italy, my dream of living the dolce vita would have failed within months.

You say you’ve had to overcome a few bureaucratic nightmares. Please tell us more.

It took me eight months, ten visits to the Italian driving authority, 12 emails, six phone calls to the DVLA in the UK and several snotty letters to convert my British driving licence to an Italian one. Originally the Italian authority told me they would just put a sticker on my expired UK driving licence and it would then be valid everywhere, including the UK. I told them I doubted Hertz car rental or the UK police would agree with them. After they checked with the Italian Ministry of Transport, the process suddenly started to gain momentum; I passed my medical and my eye test and then I submitted my documents, which included my Passport, birth certificate and Italian ID card which are in the name of Peter Grey and also my UK driving licence which was in the name of Peter Aceto-Grey, this caused massive confusion because they didn’t believe it was legal for me to change my surname and why was my surname similar to my wife’s?

When I married Eunice we hyphenated our surnames, this was my way of acquiring a little bit of Italy. Had I know the consequences I might not have insisted. It was nearly impossible to convince the Italian driving authority that Peter Grey and Peter Aceto-Grey was the same person. It took a letter from the DVLA and a lecture from my wife before they would accept the change of surname.

Despite the challenges, what are the upsides of living in Italy?

The weather is fantastic, the pace of life is great, providing you are not trying to organise a new driving licence and although I am working, I still feel as though I am enjoying a holiday in Italy.

Have you learnt Italian ?

The first words I learnt were sì, no, così così, non è vero and dov’è il bagno. I think I managed for six months using this limited vocabulary, until my wife, who was fed up with being my personal translator, forced me to attend the local night school. I am still struggling with the language, and have made some spectacular failures, for example: asking the local butcher for a kilo of minced dog (cane) instead of minced meat (carne), or explaining to a an Italian neighbour that our hens lay six grapes (uva) a day, instead of six eggs (uova). My local shopkeeper always lets me go to the front of the queue, so that all the old ladies can laugh into their hankies at the way I abuse and destroy their language.

Any downsides to living in Italy?

Driving in Italy is not for the faint hearted, the bureaucracy is a nightmare and the taxes are very high. Crossing a pedestrian crossing should only be attempted when there are no cars on the road. Mosquitoes love to feed on Englishmen. I am yet to find a fish and chip shop or a decent Chinese takeaway and the shops don’t sell bacon, HP brown sauce or proper tea bags.

Five years on, has the move been worth the risk?

If you ask my wife, I think she would prefer it if we were still living in the UK, but I love it here; everyday is different: there is always something that makes me smile or as Hilaire Belloc, the British author, said, ‘It makes one gasp and stretch one’s eyes’.

Could you ever live back in the UK again?

No, I would be very unhappy and would pine for Italy. I enjoy the café culture, the weather and the lack of traffic jams on the motorways, and the wine and grappa.

What would you advise others dreaming about living in Italy?

Either learn the language or marry an Italian, find a job before you move over here, and bring your sense of humour and a stock of tea bags and bacon.

You can catch up with peter at www.englishmaninitaly.org