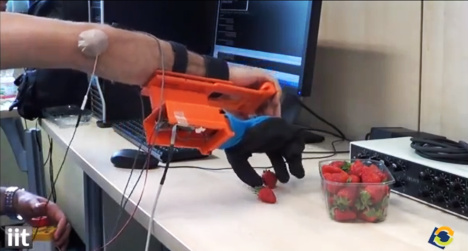 Named the ‘Pisa-IIT SoftHand’ by its creators, the robotic hand is designed to pick up objects of a variety of textures and sizes ranging from stones to strawberries.

Developed by the E.Piaggio Research Centre at the University of Pisa in partnership with the Genoa-based Italian Institute of Technology, the invention went on the market in 2012 after ten years of research.

“The real novelty of the new design of the SoftHand is that it allows the patient to control the force as well as movement,” Antonio Bicchi, coordinator of the E. Piaggio group at the Robotic Research Centre told Corriere Sera Sera.

“The hand is connected to the forearm through electrodes which register the electronic activity of surfaces of the muscle (EMG) and then the signal is analyzed by an electronic interface that communicates with the motor,” he explained.

“When we pick up a stone we complete similar actions but different in terms of the force of the grasp.”

This weekend, the device will be officially presented at the 2013 edition of the Science Festival in Genoa, northern Italy. There, spectators will be able to view the invention in action. See below for a preview: