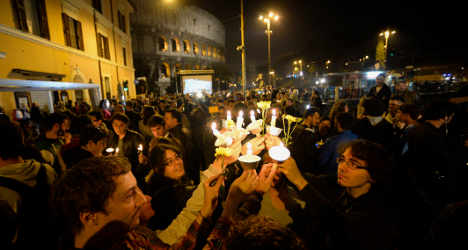 Around 500 people gathered outside the Colosseum for the vigil. Photo: Andreas Solaro/AFP

Some 500 activists and protesters holding candles, flowers and placards reading "I am gay" and "No Homophobia" demanded action after the latest in a series of suicide acts by gay students which have shocked the nation.

"This is a moment of pain for the homosexual community. These suicides are too much, they reveal a world of solitude and gay suffering," said LGBT activist Vanni Piccolo.

"We are calling for a real commitment from the institutions and not just words," he said.

The death this week of the 21-year-old known publicly as Simone D. followed two other youth gay suicides this year in Rome.

"We are here to launch a message against loneliness, we have to look after our young, gay or otherwise in this city and country," said Aurelio Mancuso, head of the Equality Italy association.

"We need a national plan to combat youth marginalization," he said.

In his suicide note, Simone reportedly wrote that "Italy is a free country, but there are homophobes and those like that must search their consciences."

"Simone's tragic gesture, and leaving a note which was also a condemnation, reminds us of the country's inability to give people of diverse sexual orientations equal dignity," said Senate vice-president Valeria Fedeli, who attended the vigil.

Parliament must "approve a law against homophobia …as quickly as possible, to restore equality, freedom and respect to Italy," she said.

In September, Amnesty International slammed Italy's lack of legislation against crimes based on sexual orientation or gender identity as "unacceptable", saying it fell foul of international human rights laws.

Italy's lower house began in July to debate a bill which would outlaw homophobic hate crimes but it met opposition from Catholic figures within the centre-right who complained such a law risked curtailing freedom of speech.