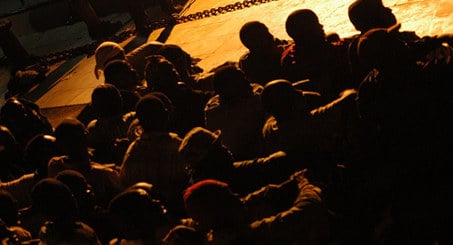 366 people died when a boat carrying migrants sank off Lampedusa in on October 3rd. Photo: NoBorderNetwork/AFP.

The 34-year-old, named by police as Elmi Mouhamud Muhidin, was arrested on the island of Lampedusa where he was living in an overcrowded migrant centre and pretending to be one of the refugees.

Investigators said some of the survivors of the October 3rd tragedy had spotted him at the centre and identified him as a member of a trafficking ring that smuggles migrants from Libya to Italy.

The Somali arrived on one of his own boats on October 25th and an alleged co-conspirator, a Palestinian, landed on November 3, the police said. The Palestinian has also been arrested.

Another man, the boat's 35-year-old Tunisian captain Khaled Bensalam, was detained immediately after the tragedy on charges of manslaughter.

Some of the 155 survivors – most of them Eritreans – attacked the Somali and the Palestinian when they saw them and the police said they could have been lynched.

The Somali was flown from the remote Italian island to Sicily on Thursday and could be seen in photo and video images distributed by the police.

He faces 30 years in prison under the charges.

Together with some Libyan militiamen, the man is accused of taking part in dozens of rapes while the migrants were being held in a refugee detention centre in Sabha in the Libyan desert.

"All the women in that centre were raped," Maurizio Scalia, the prosecutor in charge of the investigation, told reporters.

The La Repubblica daily quoted one of the criminal complaints against the Somali – the heart-rending story of one female survivor, a 17-year-old girl, as told to the police.

She said she was in a group of 130 people from Eritrea including 20 women walking through the desert from Sudan into Libya when they were seized by kidnappers and taken to a house in Sabha.

"They forced us to watch our men being tortured with various methods including batons, electric shocks to the feet. Whoever rebelled was tied up."

"The women who could not pay were assaulted," she was quoted as saying. Once the payment was made, they were then passed on for the voyage to Europe.

"They threw me on the ground, held me down and poured fuel on my head. Then three of them raped me without protection. After a quarter of an hour I was beaten and taken back to the house," she said.

Italian authorities have vowed to crack down on the people trafficking rings that have been behind the influx of more than 35,000 asylum-seekers so far this year to the country's coasts.

The police suspect that smugglers across north Africa – particularly in an increasingly lawless Libya – are working together with criminal contacts in Italy to arrange the landings.