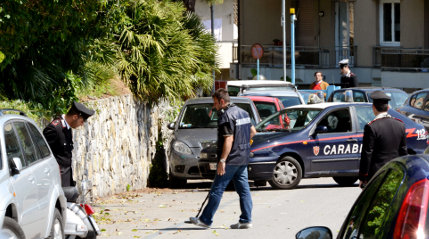 Roberto Adinolfi, the chief executive of Ansaldo Nucleare, was shot in the legs outside his Genoa home in May 2012. Photo: Paolo Rattini/AFP

Alfredo Cospito and Nicola Gai were sentenced to 10 years, eight months and nine years, four months, respectively, on Tuesday for shooting Roberto Adinolfi in both legs outside his home in Genoa in May 2012, Ogginotizie.it reported.

The men, from Turin, were members of the Informal Anarchist Federation (FAI), which claimed responsibility for the attack, saying the motive was “to punish one of the many sorcerers of the atomic industry”. The movement has a strong presence in Genoa.

The court accepted the prosecution’s claim that the attack was motivated by terrorism and so imposed the harsh sentences.

Adinolfi’s lawyer said the company executive was “expecting a response from the State like this.”

Ansaldo has been targeted in the past, with four managers attacked during the 1970s and 80s by the far-left Red Brigades movement.