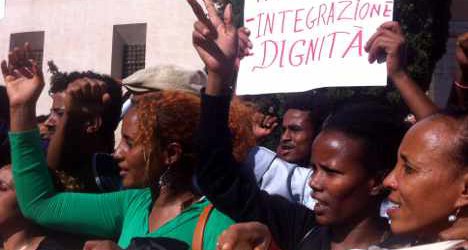 Abdelmoula followed his brothers from Morocco to Italy in 1998; a journey increasingly taken by people in search of opportunities in Europe. “Like everyone, I came to improve my life”, he tells The Local.

Abdelmoula did just that, selling tissues and lighters in his free time while he studied engineering at university. He graduated in October from the Polytechnic University of Turin and is continuing to work as a street vendor, while he continues studying for a specialized degree and looks for part-time work in an engineering studio.

His recent success prompted Fabrizio Ricca, Northern League leader in Turin, to describe the 26-year-old as “an example of good will”. The praise was surprising as the Northern League is often openly hostile towards immigrants. Earlier this year, the party criticized Pope Francis for praying for migrants on the Italian island of Lampedusa, while politicians from the party have made headlines for their hostility towards Congo-born Integration Minister Cecile Kyenge.

But Abdelmoula says that despite xenophobia in some corners of the country, his experience of moving to the Piedmont region was positive.

“At the beginning it was hard because the reality I was used to changed and there was a completely different language. But in time I found a huge number of friends, who became like a second family,” he says.

Moroccans make up the largest non-EU foreign population in Italy, with over 500,000 resident in the country. The numbers have been on the rise since Abdelmoula’s arrival and last month immigrants took to the streets of Rome in protest, calling for more rights.

Abdelmoula says that while problems remain, the increasing number of immigrants has had a positive impact on the country’s view of foreigners: “Italy now has a good percentage of immigrants and is beginning to move forward. I think the government is slowly tackling the issue.”

One of the first decisions by Prime Minister Enrico Letta when he came into office in April was to appoint Cecile Kyenge as minister for integration. Since then the minister has embarked on a campaign to modernize the country’s approach to immigration and integration, a policy which has remained largely unchanged since before Abdelmoula’s arrival.

Kyenge’s work has been overshadowed by racist attacks, including an MP likening her to an orangutan and someone throwing a banana at her during a speech. A recent poll found that a fifth of Italians believe that it is “not right” to have a black minister at all, because “the Italian population is white”.

Abdelmoula, however, looks through the racism and, based on Kyenge’s work so far, sees “a truly capable person”.

“I recently heard some of her speeches; I find that she is a very valuable person and has a good programme planned out,” he says.

Kyenge’s proposals include allowing children of immigrants to obtain citizenship; under the current law if Abdelmoula was to have children in Italy they would have to wait until their 18th birthday before having the right to call themselves Italian.

State-driven change can go some way to improving the experience of immigrants in Italy, but Abdelmoula says that newcomers themselves have a key role to play.

“I think integration is a two-way process, involving the society in which an immigrant lives but it also depends a lot on the person involved."

Abdelmoula benefitted from arriving in the capital of the Piedmont region, named as the best place for integration in Italy. This, coupled with his success from working his way through higher education, has given him a positive view of immigrant life in Italy.

“For me in Italy, and Turin in particular, it always went well,” he says.