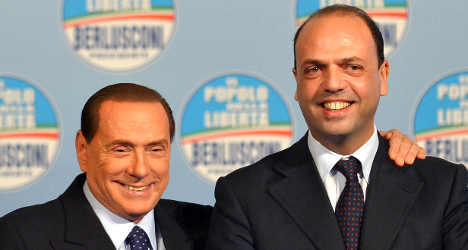 Who are these two suited Italians?

The smaller one is Silvio Berlusconi, three-time prime minister and founder of the centre-right People of Freedom (PdL) party. His sidekick is Angelino Alfano, currently deputy prime minister, interior minister and PdL secretary. Until recently, Alfano was seen as Berlusconi’s protégé.

Only until recently? But they look chummy, what happened?

This photo was taken ahead of February's national elections, when both were confident they could win voters’ hearts and rule over Italy together. Unfortunately, the PdL failed to win outright and a two-month political stalemate ensued before President Giorgio Napolitano bashed political heads together to form a coalition government.

No-one from the centre-left Democratic Party (PD) was keen to have Berlusconi on the front bench, as he was forced to resign from the premiership in 2011 when the Italian economy appeared close to collapse.

As a result, Alfano was installed in April as deputy prime minister. He holds the difficult position of being number two to both PD Prime Minister Enrico Letta and the premier’s nemesis, Berlusconi.

That sounds like an uncomfortable situation to be in.  So what happened next?

The new government was going relatively smoothly – that is, PdL and PD politicians continued to lambaste each other in the national press but kept the cabinet together. And it was at this point that Berlusconi decided enough was enough.

In September, he demanded the five PdL ministers, including Alfano, resign from the coalition. Letta rejected the resignations and the government went on to win a confidence vote in parliament after Alfano broke party ranks and backed the prime minister rather than Berlusconi.

The PdL pair have been at loggerheads ever since, as rumours spread about their political fate and the future leadership of their party.

Why is this coming to a head now?

On Saturday, PdL politicians are getting together for the national party council, with all eyes on Alfano and Berlusconi.

Far from the dull party conference one might expect, the PdL meet-up is set to be a political showdown, complete with opposing ‘hawks’ and ‘doves’.

The 'doves' are taking Alfano’s line and calling for unity within the party and support for the government, whereas the Berlusconi-faithful 'hawks' are pushing for a split within the party.

As if the astmosphere wasn't tense enough, on November 27th Berlusconi faces a vote to decide whether he will be thrown out of the Senate after being convicted of tax fraud.

If Berlusconi loses his Senate seat, the 'hawks' may well pull their support from the coalition and try to make the government fall.

This seems to have got terribly out of hand. Who will win?

Those in the know say that Berlusconi does not have enough 'hawks' to defeat Alfano’s doves, but we will have to wait and see.

Meanwhile, why not tell us whether you would back Alfano or Berlusconi?