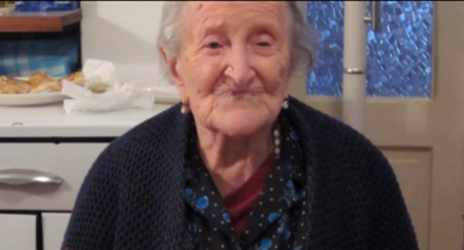 Born in 1899, Morano, who lives in Verbania in the northern Italian region of Piedmont, is also the fifth-oldest person in the world.

She was born in Vercelli, Piedmont to a family of eight children. Longevity ran in the family, with her sister living until the age of 102.

Morano started the day by receiving a letter from Italy’s president Giorgio Napolitano, which passed on “the most cordial and auspicious greetings” on behalf of all Italians, before celebrating at her home with family and friends, La Stampa reported.

The newspaper said Morano is still in “good health” and spends most of her day doing household chores and cooking.

She puts the longevity down to sleep: she’s been going to bed before 7pm and waking before 6am almost every day of her life, as well as a diet that consists of raw eggs.

“For breakfast I eat biscuits with milk or water,” she told La Stampa.

“Then during the day I eat two eggs – one raw and one cooked – just like the doctor recommended when I was 20 years old. For lunch I’ll eat pasta and minced meat then for dinner, I'l have just a glass of milk.”

She added that she “eats a sweet now and then to pass the times”.

Morano married Giovanni Martinuzzi in 1926 and their only child died when he was just six months old. The couple separated in 1938 but remained formally married. Morano was a factory worker and also worked in the kitchen of a boarding school in Pallanza before retiring at 75.