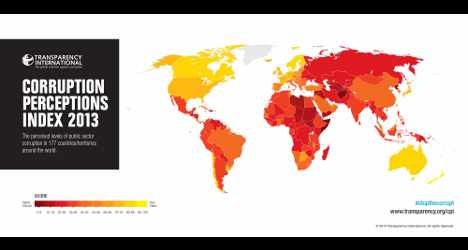 Italy came 69th in the list of 177 countries and territories in this year’s Corruption Perceptions Index. The country’s public sector is perceived to be more corrupt than dozens of other nations including Saudi Arabia and Cuba, which came in joint 63rd place.

The eurozone’s third largest economy is, however, on the up with 43 points out of a possible best score of 100, compared to 42 last year.

Italy came joint place with Romania and was perceived as less corrupt than the EU’s worst offenders: Bulgaria at 77 and 80th-place Greece.

Economic powerhouse Germany received a relatively clean bill of health, coming in 12th place, while France came 22nd in the ranking and Spain a less-impressive 40th.

Scandinavia dominated the top spots, with Denmark being named the least corrupt country. New Zealand also came joint first, with 91 points, while Finland and Sweden both got 89 points and shared third place. Norway came in swiftly behind at fifth place, with 86 points, along with Singapore.

With just eight points apiece, Afghanistan, North Korea and Somalia were ranked the most corrupt countries.

View the map of the Corruption Perceptions Index 2013: