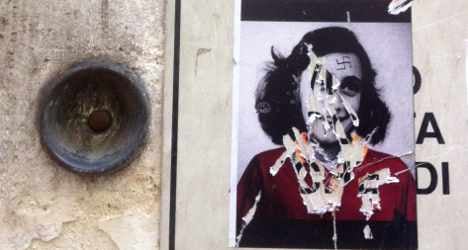 One of the stickers in Rome's Monti neighbourhood. Photo: Rosie Scammell/The Local

The stickers, similar to the ones collected for a football annual, have been appearing across Rome over the last few days: on traffic lights, walls and street signs, La Repubblica reported. The area most affected is Rione Monti, one of the city's trendiest and most central neighbourhoods.

It is thought to be the work of fans of opposing team, SS Lazio, and is not the first time anti-Semitism has entered into the rivalry between Rome's football clubs.

Rabbi Barbara Aiello, Italy's first female rabbi, told The Local that a similar incident using the same photo occurred in 2005, alongside the slogan, “Anne Frank is not going to write anymore, but will buy a little bar of soap”, referring to Jews being turned into soap at Auschwitz.

Previous chants have also included “AS Roma Juden Club”, “Teams of blacks, Jewish fans” and “Auschwitz is your homeland, the ovens are your houses".

AS Roma fans are just as guilty, using slogans such as “Anne Frank supports Lazio”. In January 2006, when a match between Rome and Livorno took place during the Week of Holocaust Remembrance, the team's fans used a banner saying “Lazio-Livorno: same initial, same oven”.

Following complaints from residents and shop owners in the area, many of the stickers have now been removed, but some still remain.

Rabbi Barbara said the latest incident "is cause for alarm, as it’s legitimizing anti-Semitic hate speech and negative attitudes towards the Jews – it’s wrapping it up in sport, but it’s still as dangerous as it’s always been.”

She believes the internet, as well as the financial crisis, has helped propel anti-Jewish sentiment across Europe, and that this week's case could be in preparation for Holocaust remembrance day on January 27th, which marks the day the Jewish people were liberated from Auschwitz.

“It happened eight years ago, and now we’re seeing this kind of thing replicated all over the city. There is a rise in anti-Semitism all across Europe – I believe this is partly due to the internet, which over the years has been making it worse: the picture was the same one used before, it was pulled right off the web…it goes hand in hand with what Jewish people still fear today.”

It also came to light on the same day Nelson Mandela, who fought against white domination in South Africa and went on to become the nation’s first black president, passed away.

“Nelson Mandela’s life was a testimony to the fact that in justice, hate is not over – we have to be vigilant in every generation – we can’t assume our job is done.” Rabbi Barbara said.