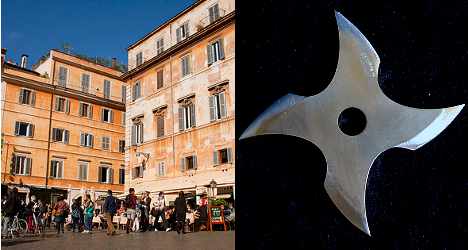 Piccolomini, named as a descendant of the 15th-century Pope Pius II, was arrested after the reportedly unmotivated attack.

The pensioner was taken to hospital with a wound just millimetres away from his jugular vein, a major vein which carries blood from the head.

Piccolomini has in recent years been implicated in a number of violent crimes, earning himself the ‘Black Count’ nickname in the press. He was tried and then acquitted for the 1996 murder of 23-year-old Paolo Segatori, who was stabbed 20 times, Italian media reported.

Piccolomini was put under house arrest in 2011 for domestic violence and earlier this year was hospitalized after a fight in Trastevere, the news website said.