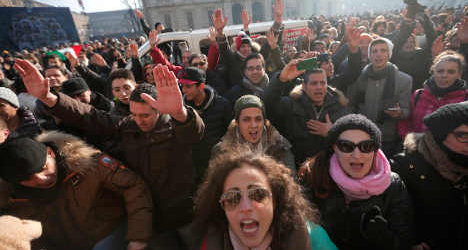 Activists pitched tents on a road bridge across a river to France near the border town of Ventimiglia, Italian media reported.

They also blocked an overpass and a motorway access point used by road traffic headed for France and by French vehicles coming to Italy, the reports said.

Contacted by AFP, the local police said all agents were in the field and could not respond to questions.

The "Forconi" (Pitchforks) had blocked one of the roads to France with trucks earlier on Thursday but their picket had been cleared by the police.

The populist movement began as a farmers' group in Sicily but now includes truck drivers and far-right groups and is able to mobilise on a national scale.

They were joined by other protesters in Ventimiglia, including local business owners fed up with high taxes and school pupils complaining about cuts to education.

Italians who work across the border in France also rallied against the cancellation of a tax break.

A total of around 2,000 people were at the protests.