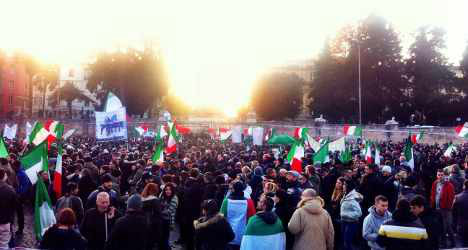 Unemployed students, hard-up business owners and immigrants took to the streets in different protests in the city centre, as Italy struggles to recover from a painful recession — its longest since World War II.

"What is the point of staying in Italy when there is so much unemployment?" asked Sebastiano Ferro, 29, an unemployed graduate and one of hundreds taking part in one of the demonstrations, called by the far-left.

At the Pitchforks protest, which included a group of far-right activists, the mood was similarly glum.

"People cannot even get to the third week of the month," said Adriano Sola, who works in his parents' bedroom furniture store in Caserta in southern Italy.

Draped in an Italian flag, 51-year-old Massimo Colombani said he would be forced to shut down his restaurant business next month because of an unbearable tax burden of up to 80 percent.

He said he had boarded a bus from Viareggio in central Italy in solidarity "with the unemployed, the small business owners, the over-qualified graduates who cannot find work or are forced to work illegally".

A 41-year-old business owner who declined to give his name said the two biggest wrongs in Italy were "excessively high taxes" and "state inefficiency".

"This government has done nothing for small businesses, which are the engine of the country," he said, as protesters around him sang the national anthem.

The Italian economy ended two years of contraction in the third quarter with zero growth but unemployment levels are still at record highs and thousands of businesses have been forced to shut down.

Italy's political class is widely discredited, and one politician who came to see the Pitchforks protest was shooed away with shouts of "Go home!" and "Go and work!"

"For everyone's good, you should all resign," read a placard held up by one man in a musketeer costume.

Riot police were out in force in the Italian capital and there were occasional outbursts of violence, including a television crew who had their camera damaged as activists shouted "Journalist terrorists!"

Among the protesters were members of the far-right group Casa Pound, who staged a flash mob demonstration earlier this week to tear down the blue European Union flag outside the EU's representative office in Rome.

The Pitchforks movement, which is divided between radical and moderate wings, is an anti-European group that wants more national sovereignty and lower taxes.

It began as a farmers' protest group in Sicily and has grown into a disparate national movement including truck drivers, students and small business owners.With a series ofdemonstrations starting last week, the Forconi snarled traffic in several cities and even on the Italy-France border with their truck pickets.

'Cry of pain from the street'

Their protests are unusual in Italy because they have not been coordinated by a political party or trade union and the group has risen up from the grassroots.

There has been concern about a possible escalation of social violence but also expressions of support – or at least understanding – from some unusual quarters.

The movement "is fully justified because we have not been concentrating recently on doing things to recover economic growth," said Giorgio Squinzi, the head of Italy's main big business union.

During a visit to a hospital in northwestern Genoa, Cardinal Angelo Bagnasco, the head of the Catholic Church in Italy, said: "Politicians should listen to the cry of pain from the street, an unease that is real in our society."