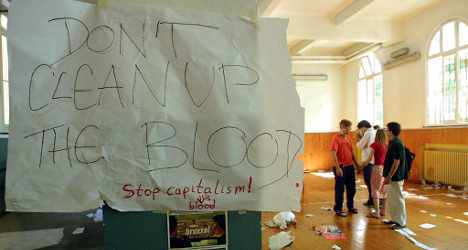 Protesters were subjected to “deliberate and gratuitous beatings” during the 2001 G8 summit in Genoa. Photo: Gerard Julien/AFP

The three were arrested earlier this week and will spend between eight months and a year under house arrest, Il Secolo XIX reported on Thursday.

Francesco Gratteri, formerly number three in the Italian police, and Giovanni Luperi, the ex-boss of Italy’s special operations central office (Ucigos), have both been ordered to serve a year-long sentence at home.

Spartaco Mortola, who ran special operations in Genoa, was given an eight-month stay at home.

The three were originally sentenced to jail terms but did not go to prison because, under Italy’s statue of limitations, too much time had passed since the crime.

The news was welcomed by Vittorio Agnoletto, spokesperson for the Genoa Social Forum group of anti-G8 activists.

“Better late than never,” he was quoted by Rai News as saying, more than 12 years after the raid took place.

Genoa Social Forum members were legally camping out at a school in the city, as part of their protest against the summit between the world’s largest eight economies, when police raided the building in the early hours of July 22nd 2001.

According to a report by Amnesty International, many of the protesters were asleep at the time and were subjected to “deliberate and gratuitous beatings”.

“Medical reports recorded injuries to 62 people detained during the raid: up to 20 people were reportedly carried out of the building on stretchers, two of them apparently unconscious,” the report said.

After the raid protesters put a sign up in the school (pictured), reading “Don’t clean up the blood”, in a bid to gather evidence of police brutality.

During the Genoa protests, police also shot and killed 23-year-old Carlo Guiliani. In 2011, the European Court of Human Rights ruled that Italian police had not used excessive force against him.