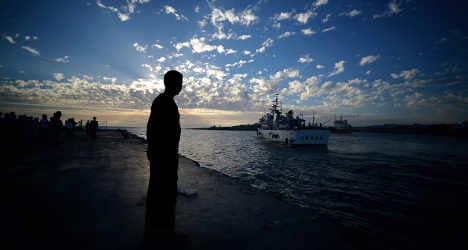 A Guardia Costiera boat arrives in the port of Lampedusa island after rescuing some 100 migrants off the shore on October 25th 2013. Photo: Filippo Monteforte/AFP

The seven Eritreans who gave evidence at the hearing included an 18-year-old girl who cowered in the arms of a police officer in court when she saw her suspected rapist, Elmi Mouhamud Muhidin, Italian media reported.

The Somali arrived on the Italian island of Lampedusa on October 25th – shortly after the shipwreck on October 3rd – and some of the survivors still sheltering in the refugee centre tried to lynch him when they saw him.

Prosecutors during Monday's hearing alleged that Muhidin was the director of the detention facility in Libya where the migrants were held before being taken to the coast to begin their ill-fated sea journey. The closed-door hearing took place in Palermo in Sicily.

The investigators said that a total of 20 women who boarded the ship had been raped by Muhidin and his henchmen and that only the girl who testified on Monday had survived the nighttime shipwreck just off Lampedusa.

"They told the judge about [how] they were held…and subjected to various types of torture to obtain a ransom to reach the Libyan shore," their defence lawyer, Carlo Emma, was quoted by TMNews as saying.

Migrants from Eritrea and Somalia frequently speak of abuses along their journeys to Europe, particularly in an increasingly lawless Libya following the fall of dictator Muammar Qaddafi.

Their allegations are rarely investigated, however, and migrant rights groups complain that more international action should be taken to ease their plight in the countries they transit through.

The seven Eritreans were transferred on Sunday from Lampedusa – the last survivors to leave the island's tiny refugee centre which has been at the centre of controversy over conditions for asylum-seekers.

The man believed to be the captain of their ship, Tunisian Khaled Bensalam, who was one of the 155 survivors of the tragedy, has been arrested and will be tried separately on multiple counts of manslaughter.