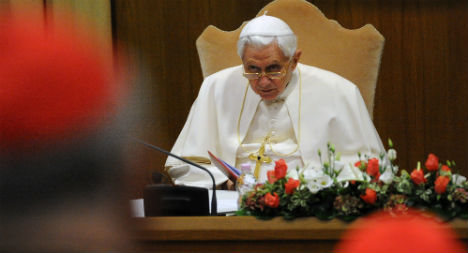 Former Pope Benedict XVI pictured in a 2010 meeting at the Vatican for talks on paedophile priests. AFP Photo / Alberto Pizzoli

But the Survivors Network of those Abused by Priests (SNAP) said these disciplinary measures were not enough.

"The Pope must start defrocking clerics who cover up sex crimes, not just clerics who commit them. Until that happens, little will change," SNAP said in a statement.

Starting in Ireland and the United States more than a decade ago, revelations of sex crimes by clergy and subsequent cover-ups by their bishops began emerging around the world and rocked the Roman Catholic Church.

Benedict XVI, who resigned last year and was replaced by Pope Francis, vowed zero tolerance for offending priests and the Vatican has reported receiving thousands of reports of abuse from local dioceses.

The Vatican's doctrinal watchdog, the Congregation for the Doctrine of the Faith, which investigates abuses under Canon Law, does not usually make its work public.

A Vatican delegation earlier this week was pushed for the first time to provide answers to the United Nations over its commitment to stamp out abuse by priests in front of the UN's child rights committee in Geneva.

Pope Francis on Thursday said Catholics should feel "shame" for the scandals, but victims' groups say there is still a lack of transparency and not enough has been done by the Vatican to report abuses to the police.

There are around 400,000 Catholic priests in the world.