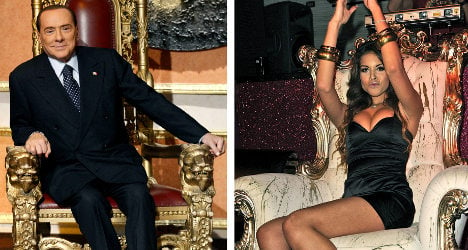 The fresh legal saga comes days after Berlusconi bounced back onto the political scene following his public fall from grace last year over tax fraud.

The latest charges are based on bribes allegedly paid to women testifying in his trial for having sex with a then-underage prostitute nick-named Ruby the Heart Stealer and abusing his powers to favour her.

Forty-five people are under investigation, including Berlusconi, his lawyers, Ruby and several other young women.

The scandal-tainted 77-year-old is now being investigated for having corrupted witnesses, including by paying the women at the parties monthly sums to testify that the gatherings were just innocent dinners.

Judges in the case had said that it "is proven" that Berlusconi had sex with Ruby, a then 17-year-old exotic dancer whose real name is Karima El-Mahroug, "in exchange for money or valuable objects".

They said witnesses "received money and other benefits" from Berlusconi and his lawyers "both before and after providing false testimony".

The ageing playboy's allies immediately leapt to his defence on Thursday, insisting the investigation was just the latest "bid to eliminate him from the political scene".

The three-time premier – no stranger to the courts during his political career – was also sentenced to a year in prison for tax fraud last year which led to his ouster from parliament and stripped of his protection from the law.

He is barred from being a candidate in the next elections and had been keeping a low profile, but returned to the fore on Saturday for talks with the country's main centre-left leader, rising star Matteo Renzi.

"I am here, and here to stay. I am surer than ever of the need to fight to the end to make sure what I profoundly believe in prevails," Berlusconi said after the news of the latest investigation into him broke.

"The most unjust and inefficient legal system in Europe has decided to become a knight of democracy" and "take care of politics," he added.

Berlusconi, who pulled his party Forza Italia (Go Italy) out of the ruling coalition following his ousting, still boasts the support of between six and seven million voters.

Renzi's request for his support on an election law deal infuriated many within the left-wing Democratic Party (PD), who slammed him for cavorting with a criminal.

The Italian justice system's leniency towards anyone over 70 means Berlusconi will not be jailed for his tax conviction but will instead serve time under house arrest or do a year's community service.

At the end of 2014 Berlusconi could also face a definitive conviction for the Ruby case – which could force him into house arrest for years.