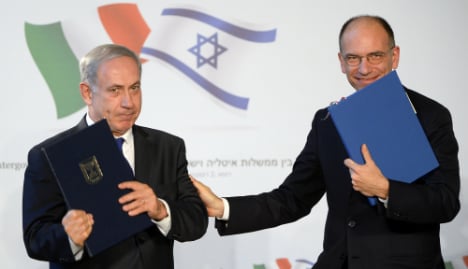 The package mailed to the embassy in the wealthy Parioli area of the Italian capital was intercepted by police after other similar parcels were sent to the synagogue and the Jewish Museum of Rome.

"Those who insult the Jewish community offend Rome. We reject the intimidation outright," Rome mayor Ignazio Marino said in a tweet.

The synagogue's package was delivered Friday just as staff received an anonymous phone call claiming there was a parcel bomb on site, the reports said.

Bomb disposal experts who rushed to the scene discovered the grisly head, which they believe came from a slaughterhouse.

Police are analysing fingerprints and DNA traces found on the boxes, which were sealed with packing tape and delivered by the same postal company.

The threats come just days ahead of the International Commemoration Day in memory of the victims of the Holocaust on January 27th.