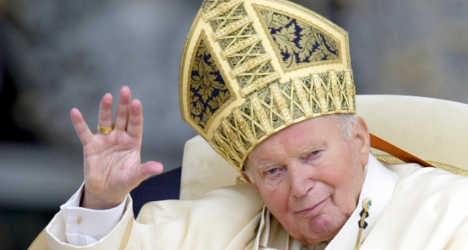 A tube containing Pope John Paul II's blood has been stolen from a church in Italy. Photo: Patrick Hertzog AFP

It was stolen on Saturday from the San Pietro della Ienca church in the mountainous Abruzzo region in central Italy where the pope, who died in 2005, loved to go on skiing holidays.

Contrary to previous media reports, the relic is not a vial of blood but a framed, tiny square of cloth stained with the pope's blood, Pasquale Corriere, head of the "San Pietro della Ienca" association, told AFP.

The cloth, which reportedly comes from the robe the pontiff was wearing when he was shot in an assassination attempt in 1981, is enclosed in a gold and glass circular case.

"The church was closed because of a snow storm. When we went to reopen it, we saw the bars on one of the windows had been sawn through. The thieves entered that way, and stole the relic," Corriere said.

The framed cloth was given to the small church in 2011 by Stanislaw Dziwisz, a cardinal who served as John Paul II's personal secretary until his death in 2005.

"I have no idea who could be behind such a terrible theft," Corriere said.

According to local media reports, some 50 police officers and sniffer dogs are sweeping the area, famed for its weathered stone houses and the little church where the head of the Catholic Church once reportedly took refuge in a storm.

Corriere said there are only three vials in the world containing the former pontiff's blood.

John Paul II and the Italian pope John XXIII are set to become saints in a ceremony at the Vatican in April – an event which will substantially increase the value of the stolen relic.

The Polish pope was nearly killed in an assassination attempt in St. Peter's Square on May 13, 1981.