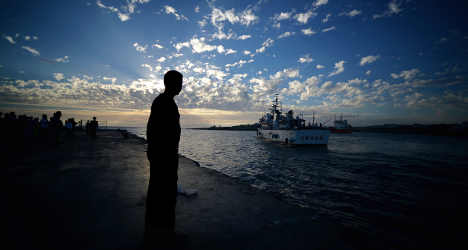 Most of the migrants were fleeing war or abuses in Syria, Eritrea and Somalia, said the inter-governmental organization.

"What these figures tell us is that in 2013, there were more people fleeing wars and dictatorial regimes," IOM spokeswoman Christiane Berthiaume told reporters.

The majority of migrants headed to the Italian islands of Lampedusa and Sicily, while a smaller proportion went to Malta.

Some 11,300 of those who crossed last year were from war-torn Syria, while 9,800 came from Eritrea whose regime repeatedly faces international condemnation of its human rights record. A further 3,200 were from Somalia, which has been gripped by violence for decades.

The risks of crossing the Mediterranean in rickety and overloaded smugglers' boats were underlined last October when 336 migrants died in a shipwreck off Lampedusa, most of them Eritreans.

In total, some 700 migrants perished last year while attempting the sea crossing, while over the past two decades, some 20,000 people are thought to have died, according to the IOM.

"There are probably many more who are dead and about whom we know nothing, and never will," noted Berthiaume.

"Behind these cold, impersonal figures are women, men and children who flee violence and are seeking a better life. It's urgent to prevent people dying and to make migration a matter of choice and not of desperation," she added.