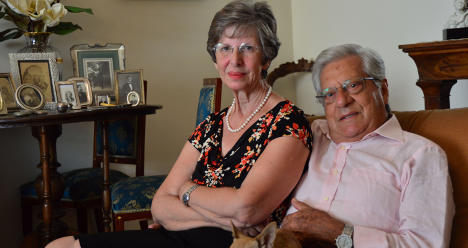 Angela and Gino Manca have been campaigning for an investigation to be reopened into their son's death. Photo: Lietta Granato

It is Angela Manca, Attilio’s devoted mother, who has kept up the campaign to reopen the investigation into his suspicious death.

For ten years she has openly accused the mafia of her son’s murder and relentlessly pursued all legal avenues to prove this, despite being shunned in her hometown and putting her own life at huge risk.

On the picturesque island of Sicily two very different career paths transpired for two very different men: Bernardo Provenzano followed in the well-trodden footsteps of the Sicilian mafia, becoming one of the most powerful and infamous bosses of his time. The other, Attilio Manca, used his intellect to escape the pull of criminality and became one of the shining lights in Italian medicine.

But an encounter between the two Sicilians in 2003 would have fatal consequences, according to Angela.

“Their paths crossed and everything changed,” she said.

Attilio Manca was only 31 years old when, in 2001, he emerged as Italy’s leading expert in performing technologically advanced laparoscopic surgery on prostate tumours. Having left Sicily to pursue his studies in Rome and Paris, he rarely returned but maintained close contact with family and friends.

Some people believe it was this contact with old friends, who had since become embroiled in the mafia of Messina, coupled with his particular medical expertise, which led to his death.

Bernardo Povenzano, otherwise known as “The Tractor”, is thought to have headed up the Cosa Nostra from the 1990s onwards. He was on the run for 43 years before finally being captured in 2003 and indicted for 28 murders, including the brutal slayings of anti-mafia magistrates Paolo Borsellino and Giovanni Falcone in 1992.

Despite the wave of public ill-feeling following those high-profile assassinations, Provenzano still exuded enormous authority from the shadows.

In October 2003, suffering from prostate cancer, he visited La Ciotat clinic in Marseille, southern France, for treatment. A Sicilian doctor assisted during Provenzano’s laparoscopy, according to transcripts of police-tapped telephone conversations by mafia boss, Francesco Pastoia, published in February 2005 in the Gazzetta del Sud. Pastoia, Provenzano’s right-hand man for many years, was unable to clarify further as he was found hanged in his cell days after the recordings were released.

The parents of Dr Manca later recalled two conversations with their son from autumn 2003 when he mentioned he was on a work trip to the south of France “to see an operation”. It was not part of his normal routine to fly to France for surgical procedures nor are there any official traces of his involvement.

The operation in France is significant for two major reasons. Firstly, it provided much welcome DNA evidence to Italian anti-mafia prosecutors that Provenzano was still alive and at large. Up to that point, the general consensus was that the mafia fugitive was long dead – as claimed by his lawyer. According to anti-mafia prosecutor, Maurizio De Lucia, the DNA found in France, when compared to that of Provenzano’s brother, “left no doubt as to the genetic compatibility”.

The second impact of the operation in France,  according to Antonio Ingroia, the high profile anti-mafia lawyer and campaigner, is that it ultimately led to Dr. Manca’s murder some three months later.

Dr Manca’s bruised and bloody body was found in his apartment in Viterbo, Lazio by the emergency services. A deviated nasal septum and a plethora of bruises adorned his body and there was a pool of blood on the floor. It is only now that pictures of the crime scene, strongly suggestive of violence, have been made public.

Alberto Pazienti, the prosecutor of Viterbo, continues to maintain that his death was a “drug tragedy”, dismissing the mafia angle as “urban legend”. Then there are those, such as Ingroia, who claim the investigation was “full of holes” and question why the link to the surgery in France was never properly examined. There are many others, including members of the Italian police force, who also believe the death was mafia-related, despite official assertions.

Other inconsistencies have emerged in this case, such as why a left-handed person injected himself in his left wrist and forearm; or why he replaced the caps on the syringes and left them in the kitchen.

Numerous other questions remain unanswered: Why were there no fingerprints on the syringes? How did Manca break his own nose and end up black-and-blue when his body was found face down on a duvet? Where did items of clothing belonging to the semi-naked victim end up? Why would a 34-year-old successful surgeon who colleagues said was “bursting with life from every pore” decide to kill himself and in such an unseemly way? Why did records of phone calls between Manca and his parents “disappear”?

In a final conversation on February 11th 2004, Attilio sounded nervous, his mother said.

“He said the strangest thing…He asked us to fix his moped that he kept in a garage in Tonnarella, a nearby village. After his death we checked his bike and noticed it worked perfectly: maybe it was a coded message”.

Subsequent evidence would reveal one of Provenzano’s hideouts was in Tonnarella. Was Attilio Manca murdered because he might be able to reveal the whereabouts of Italy’s most wanted fugitive? Or simply because he knew too much?

Locals spit at her and call her deranged; her neighbours throw abuse and mock her. Her face shows the years of strain and her exhaustion. But still, Angela Manca keeps on fighting.

Now the drug dealer, who allegedly supplied Dr. Manca with heroin, is to go on trial on June 12th, something that may provide a new means of investigating what really happened in Viterbo.

“I’m tired”, said Angela when she heard the case was going ahead. “I’m so tired but for my son I have to keep going until the truth comes out”.

Kerry Waldron is a writer based in Umbria. www.irishinumbria.com