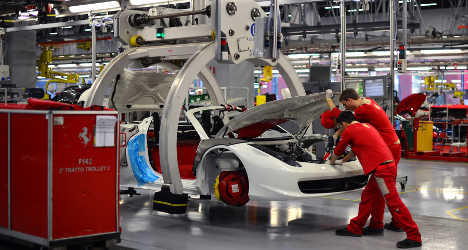 Italy's industrial production was down 3.0 percent over 2013. Photo: Gabriel Bouys/AFP

The official data from the Istat agency showed industrial production was also down 0.7 percent from December 2012 and down 3.0 percent over all of 2013.

Analysts had expected the monthly figure to remain unchanged, after the economy in the third quarter formally ended two painful years of recession with zero growth in Italy's gross domestic product (GDP).

"The result does not question the forecast of a return to growth in the fourth quarter of 2013 but it does confirm that the recovery will be very gradual," said Paolo Mameli, an economist from Intesa Sanpaolo bank. The fourth quarter figure will be announced on Friday.

Raj Badiani, an analyst at IHS Global Insight, said there were "risks" for 2014 although it was unlikely that Italy would fall back into recession.

Badiani said he expected GDP growth of between 0.0 and 0.1 percent – far from the 1.0 percent forecast by the government, while central bank governor Ignazio Visco has said he is expecting growth of 0.75 percent.