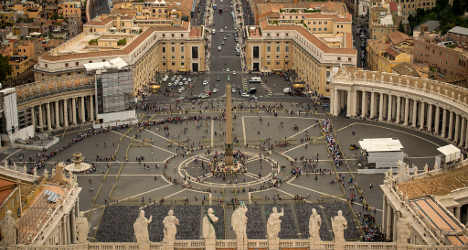 The men threatened to set themselves on fire in St Peter's Square. Photo: Diego Cambiaso/Flickr

The two men were found with bottles of petrol and lighters in the heart of the Vatican, demanding to have their voices heard by state institutions and rallying against the economic crisis, La Repubblica said.

They were prevented from setting themselves alight when Italian and Vatican police intervened, La Repubblica said.

The duo had reportedly been part of a demonstration the previous day in Rome, organized by the broadly anti-austerity “Pitchforks” (Forconi) protest movement that gained pace in Italy in December.

But protest leader Danilo Calvani distanced himself from the two men, saying they “had nothing to do with” the Pitchforks movement.

The Vatican protest comes just weeks after an Italian man died after setting himself on fire in St Peter’s Square. A Jesuit priest tried to save the 51-year-old, who was rushed to hospital with third-degree burns but died from his injuries three days later.

Just days later, on Christmas Eve a man in Naples died from his burns after self-immolating in the southern city, reportedly an act of desperation five months after losing his job due to the economic crisis.

According to the latest figures there are currently 3.254 million people out of work in Italy; national unemployment hit 12.7 percent in November while youth unemployment soared to 41.6 percent.

Those in work are also suffering from the country’s weak economy. Recent figures show that hourly salaries rose by just 1.4 percent last year, the lowest increase in more than 30 years.