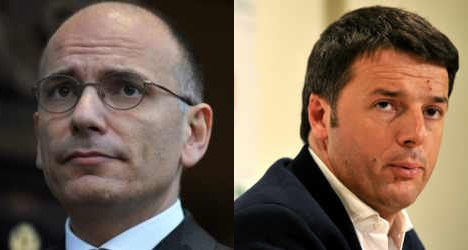 Letta said Thursday he would submit his resignation to President Giorgio Napolitano following his final cabinet meeting at 1030 GMT after less than a year in power at the head of an uneasy coalition.

The drama in Rome comes after weeks of feuding between Letta and Renzi, the newly-elected ambitious leader of the governing centre-left Democratic Party (PD), which fell behind him in calling for a change in government.

"Mortal Jump", read a headline in the weekly L'Espresso, saying Renzi was "pulling the strings of an operation organised at a table two months ago: it could crown his leadership or reduce his popularity to smoke".

The "relay" between Letta and Renzi is an unpopular move among Italians, according to opinion polls, and there is concern in the party that it could strengthen disgraced former prime minister Silvio Berlusconi.

Analysts said Renzi is now tainted with the image of a cloak-and-dagger politician who overthrew Letta – a leading member of his own party – despite an earlier agreement to allow him to stay on until 2015.

But they also said he could quickly win support if he manages to push through important reforms, and investors were broadly supportive with stocks and bond rates holding stable on the financial markets.

The stock market in Milan on Friday opened up 0.37 percent ahead of the release of fourth quarter economic growth data expected to show a gradual recovery from a devastating two-year recession has begun.

Mario Calabresi, the editor of La Stampa daily, said the sudden crisis at the top had generated "a sense of incredulity" among Italians as most people had expected early elections to be held.

But the paper's politics expert Giovanni Orsina said Renzi's rise "might be the only sensible solution possible" as he is "considered by many the only way to get Italy out of the quagmire".

The top-selling Corriere della Sera daily said Renzi had "the ability to surprise" but warned that politics was not "all about special effects".

One point in Renzi's favour was the ringing endorsement he won from the Democratic Party.

At a tense meeting on Thursday, members of the party's directorate lined up to support him and approved his motion calling for a change of government.

But Renzi still faces delicate days ahead before he can finally clinch his goal of becoming the European Union's youngest prime minister and Italy's youngest ever government leader.

Deputy Prime Minister Angelino Alfano, leader of the New Centre-Right party, a minor coalition partner whose votes are critical, has already said his support for Renzi is not a given.

Despite having been expelled from parliament over a criminal conviction for tax fraud and being a defendant in three other court cases, Berlusconi could also score political points.

Berlusconi's Forza Italia opposition party has already said he will lead upcoming coalition consultations with the nominee for prime minister — virtually certain to be Renzi.

Whatever the difficulties, some analysts say a new Renzi government could be formally sworn in as early as next week and the names of possible ministers have already begun circulating.

Among the possible choices in Italian newspapers are author Alessandro Baricco as culture minister and food tycoon Oscar Farinetti, the founder of Eataly, as agriculture minister.

A former Boy Scout known for his catchphrases and popular hashtags, Renzi is generally well-liked among Italians because he is seen as a relative outsider on the national political scene.

Renzi has never been in government and parliament although he has extensive experience in local administration as mayor of Florence and was praised for lowering taxes and promoting recycling.

He is often spotted in retro sunglasses and wearing a leather jacket and jeans, earning him the nickname of "Fonzie" – a reference to a character in the classic US sitcom "Happy Days".