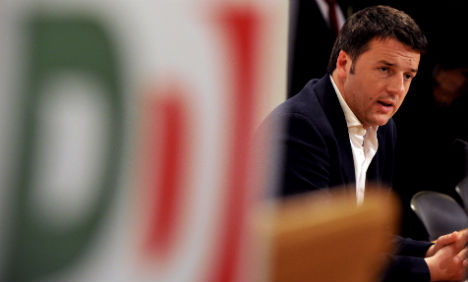 Party boss Renzi was set to be picked by President Giorgio Napolitano after a day of consultations with political leaders at the presidency including disgraced former premier and opposition leader Silvio Berlusconi.

The anti-establishment Five Star Movement protested what it called an undemocratic power grab by Renzi and boycotted the talks with Napolitano, saying Italians should be allowed to choose through elections.

Letta stepped down on Friday after the Democratic Party approved a motion calling for a new government proposed by the 39-year-old Renzi, an ambitious former Boy Scout who was elected to the party leadership in December.

Renzi would be Italy's youngest ever prime minister if his bid succeeds and has promised a radical programme of reforms to combat rampant unemployment, boost growth and slash the costs of Italy's weighty bureaucratic machine. Opinion polls show Renzi enjoys high popularity ratings, mainly because as someone with no experience in national government or parliament he is seen as a welcome breath of fresh air in Italy's discredited political system.

But the polls also indicate that most Italians would have preferred early elections and are opposed to what critics defined as a "palace coup" engineered by Renzi following weeks of increasingly bitter feuding with Letta.

Investors are betting on a Renzi government pushing through key reforms, however, with stocks rising as Letta resigned on Friday and Moody's ratings agency improving its outlook for Italy from negative to stable. Italy's economy showed signs of emerging from a devastating recession, with a preliminary estimate on Friday showing it grew 0.1 percent in the last quarter of 2013 in the first positive result in two years.

Napolitano began his day of consultations on Saturday by meeting with the smallest parties in parliament and will work his way through to a final meeting with the Democratic Party scheduled for 1815 GMT.

If Renzi receives the nomination he will then have to hold his own consultations on forming a government in the coming days and analysts are predicting that the new cabinet could be installed by the middle of next week.

One key meeting on Saturday will be the one with Angelino Alfano, interior minister and leader of the New Centre-Right party — a minor partner in the coalition whose support will be crucial for any Renzi government.

In an interview with Rome's Il Messaggero daily, Alfano said his taking part in a coalition was "not a given" and predicted there was a 50-50 chance that fresh elections might have to be called if the consultations fall through.

Berlusconi's participation in the process is controversial as he was expelled from parliament last year over a tax fraud conviction and is involved in three other court cases including for abuse of office and alleged bribery. Berlusconi looked to score political points, telling a rally that Renzi's power play was "not something that should be happening in a democracy" and that he was Italy's last democratically-elected prime minister.

Berlusconi was forced out in November 2011 under pressure from a parliamentary revolt, mounting legal scandals and a wave of panic on the financial markets.

Napolitano named economist Mario Monti at the head of a technocratic government to succeed him and again stepped in last year after an inconclusive general election by appointing Letta as leader of a grand coalition.