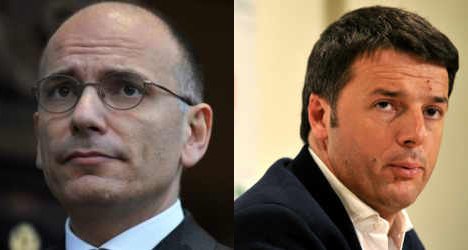 Just 31 percent of Italians think replacing Letta with Renzi, who aged just 39 is set to be Italy's youngest-ever prime minister, is positive, an Ipsos poll on Sunday found.

In general, Italians appear exhausted by the prospect of their fourth government in less than two years.

Just 12 percent told Ipsos they were “excited” about Renzi’s move, 18 percent were “indifferent” and 30 percent “resigned” to the political musical chairs.

Thirty-seven percent were “indignant” that Renzi, currently mayor of Florence, is due to become prime minister less than 10 months since Letta took over.

SEE ALSO: 'Italians are sick and tired of politics'

Renzi was formally nominated to become prime minister on Monday by President Giorgio Napolitano, following a two-day consultation with political parties at the Quirinale presidential palace.

The decision comes after the Democratic Party (PD) last week voted to support Renzi, elected party secretary in December, in his bid for the premiership above fellow PD politician Letta.

The PD’s decision effectively forced Letta to resign on Thursday, just a day after he denied that he was being pushed out of office.

Renzi will begin coalition talks on Tuesday to try and get consensus on key areas of reform, including overhauling Italy’s labour market and tax system.