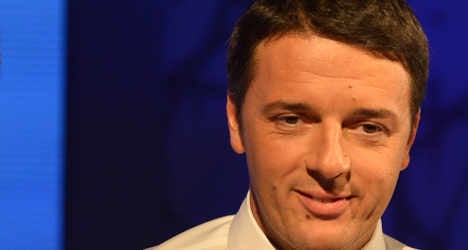 Renzi said he would begin formal coalition talks on Tuesday and predicted they would take "a few days" as he plans to form a stable government that can survive until the next scheduled elections in 2018.

"We will take the time we need, with the knowledge that there is a sense of urgency out there and this is an extremely delicate and important time," he said after being given the mandate by President Giorgio Napolitano.

"The most pressing emergency, which concerns my generation and others, is the emergency of labour, of unemployment and of despair," the 39-year-old said.

"I will put all my energy, enthusiasm and commitment into this difficult situation," he said.

He vowed that if he succeeds, he would act quickly to reform the constitution, the labour market, education and the tax system in his first few
months in power.

The 39-year-old was tasked by President Giorgio Napolitano with forming a new coalition government, which is expected to be put to a decisive confidence vote in parliament later this week.

The 39-year-old head of the leftist Democratic Party received the nomination to become the nation's next premier after ousting his predecessor Enrico Letta – a member of his own party whom he accused of failing to live up to reform pledges.

His nomination by President Giorgio Napolitano has been welcomed by investors but left analysts wondering whether he has the political maturity to succeed.

In the first test of his political prowess, the baby-faced former Boy Scout will now have to move quickly to form a new government capable of carrying out much needed economic and political reforms, before facing a decisive confidence vote in parliament later this week.

"He desperately needs figures of excellence (in the cabinet), new ones if possible," said editorialist Gian Antonio Stella in the best-selling Corriere della Sera daily.

The previous coalition of the Democratic Party, the centrists and the New Centre-Right party is expected to remain intact even though the leader of the latter, Angelino Alfano, has warned this is "not a given".

The New Centre-Right is a minor partner in the coalition but its votes would be critical for Renzi as he does not have a majority in parliament.

"Speed is part of Renzi's personality" but "the creation of such a team is no easy task", political watcher Federico Geremicca said in La Stampa, while the Corriere said the future PM may have underestimated "the nature and complexity of the problems to be resolved."

The energetic and web-savvy Renzi has no previous experience in national government or parliament and is seen by many as having the right kind of outsider credentials for the job.

But his critics warn he risks failing to pull together a fresh, credible cross-coalition cabinet or burning out rapidly.

"The Matteo Renzi era begins today. Whether it will be long or fleeting, destined to change Italy or end up a mere a power play, we cannot know," political analyst Stefano Folli for Italy's Il Sole 24 Ore financial daily said.

Risk of period of instability

Many people seem willing to give him the benefit of the doubt even though they would have preferred early elections, as long as Renzi delivers on his promises to combat rampant unemployment and boost growth.

Market reactions have been favourable so far – with Italy's borrowing costs dropping to an eight-year low on Monday – though analysts warned the difficulties in ruling over a testy coalition government remain.

"The market hopes that Renzi will be rather more flexible" than his predecessor Letta, "and there is maybe room for reforms even though the political obstacles are the same," said Credit Agricole CIB economist Frederik Ducrozet.

Credit Mutuel-CIC agreed, saying "investors are reacting positively to this switch of government but the risk of a period of instability and of new elections cannot be overlooked."

Renzi's on-the-ground local achievements like lowering some taxes, boosting recycling and encouraging innovation are seen as positive signs but analysts say he will now have to prove himself on a much bigger scale.

He is little known internationally but sees himself in the mould of former British prime minister Tony Blair and his "New Labour" programme and his rise is being closely-watched by centre-left parties in Europe.

He would be the youngest serving government leader in the European Union.

His informal style is unusual in Italy's political world and his prolific use of social media and knack for catchphrases have endeared him to many younger Italians turned off by an ageing political elite.

His leather-and-jeans dress sense have also earned him the nickname "Fonzie" — from the US sitcom "Happy Days" — and his retro sunglasses have been likened to those used by the comedy band "The Blues Brothers".

But the past few days have cast Renzi in a darker light.

Following his election to the party leadership in December, Renzi had ruled out unseating Letta but did just that on Thursday, when he tabled a motion to senior party members calling for a new government.

The motion was approved with a crushing majority in what appeared to be a stage-managed event that came a day after Letta defiantly vowed not resign and accused his rival of attempting a "palace coup".