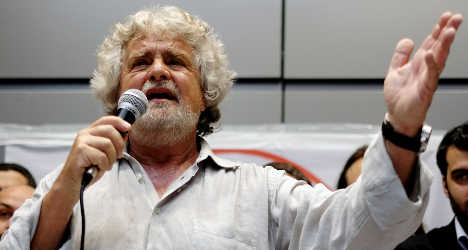 Since being nominated for the premiership on Monday, Renzi has been meeting with party leaders to gain the political backing needed to push urgent reforms through parliament.

While some meetings, such as one with Go Italy (Forza Italia) leader Silvio Berlusconi, have gone relatively well, the same cannot be said of Renzi's meeting with Grillo.

Visible to all by a live internet stream, their meeting appeared to be a dialogue of the deaf, with neither side appearing interested in the other.

Grillo eventually told him: "You are not credible. You're young, you know nothing…your programme is a copy and paste of our's".

Renzi rose and told him: "Outside of this blog, we have some real problems to resolve."

A furious Grillo then told journalists gathered outside the talks: "This is a war. No more deals, mediations, coalitions. That world is over."

Despite the air of confrontation, 39-year-old Renzi remained optimistic.

"After a difficult day and a half of consultations, I am convinced the conditions are in place to do an excellent job," he said as he wound up the meetings.

"This is a country that has a real possibility of coming out of the crisis, but doesn't just want words of hope from politicians, but concrete plans," said a tired-looking but smiling Renzi.

The Tuscan politician said he expected to form a coalition made up of his own centre-left Democratic Party (PD), centrists and the small New Centre-Right (NCD) party.

Berlusconi confirmed that his party would remain in opposition but said he would support Renzi's new government if "its plans are in the interests of Italian citizens".

"We have assured the new prime minister of our willingness to work together," he told a press conference.

Berlusconi said he is particularly keen to work with Renzi on electoral law reform, an area they have already forged agreements in the past.

"I believe it is essential to reform parliament so that there is more than one house which approves laws," said Berlusconi, who also advocated a direct election for the president, who is currently selected by lawmakers.

Renzi is expected to spend Thursday working on his programme and Friday on his cabinet line-up, which will then likely be submitted to President Giorgio Napolitano on Saturday before the government is sworn in and voted into office by parliament.

Watch a video of the consultation between Renzi and Grillo (in Italian):

SEE ALSO: Renzi takeover is a 'blow to democracy' for Italians