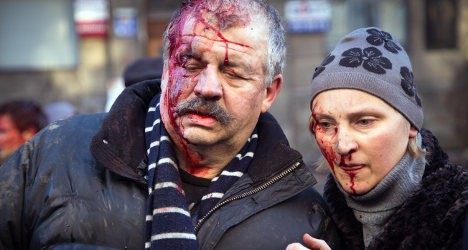 An estimated 250 people were injured as police officers sought to clear a protest camp, set up in November to oppose the Ukrainian government’s decision to abandon a deal with the EU.

Hopes of a political solution to the crisis faded overnight as Ukrainian authorities embarked on what Bonino described as “violent, indiscriminate and disproportionate reactions to the popular protests.”

Tens of thousands of Ukrainians have braved sub-zero temperatures in recent weeks to oppose President Viktor Yanukovych’s closeness to Russia, which is perceived as isolating the country from its European neighbours.

The escalation of violence amounted to a “concrete risk of civil war, at the threshold of the European Union,” Bonino said in a statement.

She called for both sides to return to the negotiating table – stating “there is no true alternative” – and warned that Italy could impose sanctions on Ukraine.

“If the violence continues, we cannot rule out recourse to exceptional restrictive measures,” Bonino said.

Italy’s response came just hours after Pope Francis raised concerns over the recent deaths, urging “all parties to stop all violent actions and seek agreement and peace for the country.”

Condemnation of the crackdown rang out from across Europe on Wednesday, with Chancellor Angela Merkel and French President Francois Hollande decrying the “unspeakable acts” of violence in a joint press conference.

European foreign ministers are due to meet on Thursday to decide on possible sanctions, Merkel said.