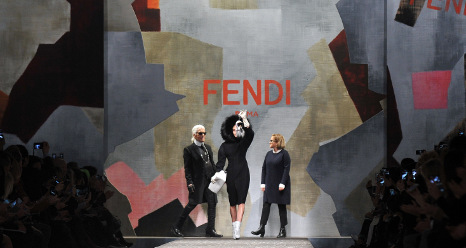 The drones whirred ominously overhead in the closed showroom as Karl Lagerfeld's collection flowed along the runway, with the models seemingly unfazed by the new technology.

The drones "allow us to be pioneers once again and project ourselves into the future", said Pietro Beccari, chairman of Fendi, which is owned by French luxury giant LVMH.

Beccari said the drone footage, which was streamed live on Fendi's website and on social media, would "give our fans a chance to see the show like it has never been seen".

The military technology of drones seemed oddly appropriate for a collection that looked back to the wartime 1940s – with a green-and-brown colour palette, fur shoulder wraps and ankle-length trench coats.

But Kai Margrander, fashion director at Glamour magazine in Germany, said he had been "irritated" by the flying contraptions.

"I'm from Germany. We're very suspicious of things like that from our past with the Nazis and the Stasi in the East," he said.

Yurata, a fashion editor from InStyle magazine in Moscow, said she liked the drones.

"It's very futuristic. Nobody does this!" she gushed, saying the show was "spectacular".