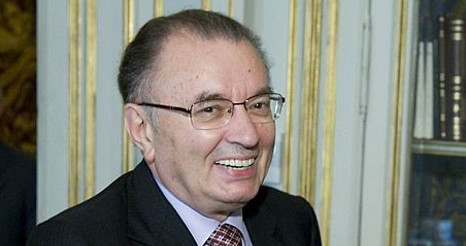 Giorgio Squinzi, head of the Confindustria, said he wants a government that will solve Italy's financial crisis. Photo: Wikipedia

"We want a government really capable of providing answers to a country exhausted by a crisis which has lasted six years and which needs to recover as quickly as possible," said Giorgio Squinzi, head of the Confindustria lobby and CEO of Mapei.

"We dream of a finance minister who gets the job done, who takes measures to help the economy," he said, as rumours abounded in the Italian media over the possible line-up of Renzi's new cabinet, which is expected to be unveiled on Saturday.

The post of finance minister is a crucial one for the eurozone's third largest economy, which is struggling to reverse the effects of a deep
recession and is lumbered with a public debt equivalent to 130 percent of total economic output.

Among those named as possible candidates is Pier Carlo Padoan, a former Rome university professor who was number two at the Organisation for Economic Co-operation and Development (OECD) before heading up Italy's national statistics institute.

Giampaolo Galli, a member of Renzi's centre-left Democratic Party (PD) and former Bank of Italy economist has also been touted, as has Lucrezia Reichlin, a professor at the London School of Economics (LSE).

Florence mayor Renzi was tasked Monday with forming a new government after his PD party ousted his predecessor Enrico Letta, whom he had accused of failing to implement promised reforms.

Hundreds of thousands of businesses have been forced to shut up shop and unemployment currently stands at a near record 12.7 percent.

Analysts said it was Confindustria's anger over Letta's perceived failure to act to revive domestic demand, boost investments or create jobs which prompted Renzi to launch his power grab.

The new PM-designate is currently finalising his programme after carrying out a lightening round of talks with political parties.

He is expected to form a coalition government with centrists and the New Centre Right (NCD) party, lead by Angelino Alfano, former right-hand man to media magnate Silvio Berlusconi.

Three-time former premier Berlusconi has said his centre-right Forza Italia party will stay in opposition, but political watchers say he may work closely with the 39-year-old Renzi, whom he considers a younger version of himself.

"Berlusconi sees in Matteo his own iron will, his strength, his frankness. He has never hidden his great liking for the passion of a much younger man who seeks to create an important political process," said Alessandra Ghisleri who has conducted polls for the billionaire for years.