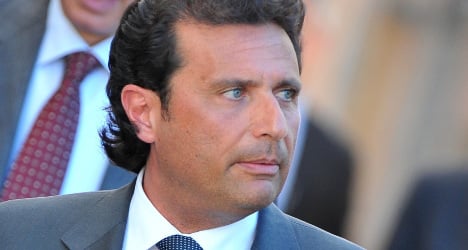 Francesco Schettino is on trial for the manslaughter of 32 people. Photo: Tiziana Fabi/AFP.

The trial judge on Tuesday accepted a request from Schettino's defence that he be allowed to take part in a visit to Giglio Island by a group of experts working for the court.

Judge Giovanni Puliatti said Schettino would be there "as a defendant, not a consultant", Italian media reported.

Puliatti said he would therefore have permission to "be present during the work but not to intervene".

Schettino will board the giant liner, which crashed into the island off Tuscany in January 2012 with 4,229 people from 70 countries on board in a tragedy that claimed 32 lives.

The captain is charged with manslaughter and abandoning the ship before the end of the evacuation – an accusation that earned him the tabloid nickname of "Captain Coward".

Schettino has said that he fell into one of the lifeboats because the ship was keeling over and later wanted to oversee the evacuation from land rather than on board.

The 290-metre (951-foot) ship was dragged upright last year in the biggest ever salvage of a passenger ship and it is due to be refloated and towed away for scrapping later this year.

Prosecutors on Tuesday also said they had opened a separate investigation against the Costa Concordia's legal guardian, Franco Porcellacchia, who is overseeing the salvage.

Porcellacchia is alleged to have boarded the ship illegally a day before another inspection last month, accessing a room with a generator that has been declared off-limits by the court.