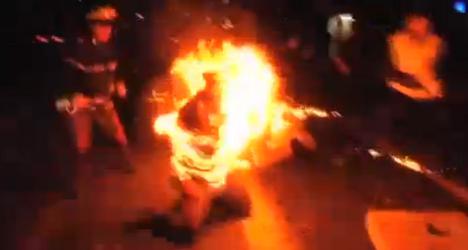 A police officer is overwhelmed by the flames. Screenshot: CorriereTV

Carlo De Gaetano doused a blanket in petrol before setting it alight and stepping over the flames, outside in restaurant his Monza.

Dramatic video footage shows two police officers rushing to stop De Gaetano, before they, too, are overwhelmed by the flames. Other members of the emergency services can be seen helping the three men, all lying on the ground, while one of the officers tries to cover his face.

The flames were quickly put out and the three men’s injuries are not life-threatening, Corriere della Sera said.

De Gaetano reportedly held the protest to oppose an anti-noise barrier which is due to be installed in front of his restaurant, which he argues would obscure his business and block access.

The restaurant has been run into financial difficulty after a car tunnel was constructed on the road, and De Gaetano may be forced to close it, Corriere said.

The Monday night protest came a few weeks after a group of business owners held a joint protest against the proposed barrier.

SEE ALSO: Italian protesters try to set themselves on fire