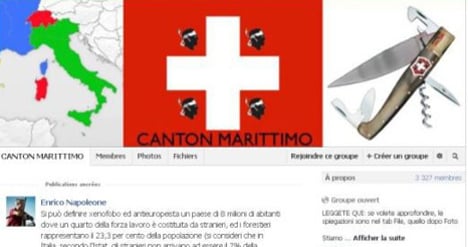 The “Maritime Canton” (“Canton Marittimo”) Facebook group has gained more than 3,500 members attracted to the debate of selling Italy’s second-largest island to the wealthy Swiss.

“We are investigating the willpower of Sardinians of allowing Italy to sell Sardinia to Switzerland, to repay part of the public debt and restart the national economy,” the group description reads.

The group’s creators also address some of the key practical issues of switching nationalities after 150 years as part of Italy.

“Us Sardinians therefore become Swiss, without doing military service, have [Swiss] francs instead of the euro, and a local economy aligned as soon as possible with that of the new motherland,” the group says.

While first set up in 2012, the group was reactivated over the weekend as Italy’s newly-appointed prime minister, Matteo Renzi, was sworn into power.

“The time has arrived to reopen negotiations,” according to the group, inviting people to contribute ideas both for and against a breakaway Sardinia.

The fresh campaign comes just days after the Swiss voted to curb immigration from the EU; a restriction which would presumably not apply to the proposed Swiss-Sardinian canton.

While the approach of ditching Italy for a more wealthy neighbour may be new for Sardinia, the concept of succession has been popular in other parts of Italy.

The Northern League (Lega Nord) party gained prominence in the 1990s by calling for independence for the north of Italy, which it saw as propping up the country’s poorer southern regions.

Earlier this month party leader Matteo Salvini renewed calls for autonomy, while backing similar campaigns in Scotland in the UK and Catalonia in Spain.

The Italian regions already have varying levels of fiscal autonomy, with Sicily and Trentino-Alto Adige having greater control over their taxes and budgets than other parts of Italy.